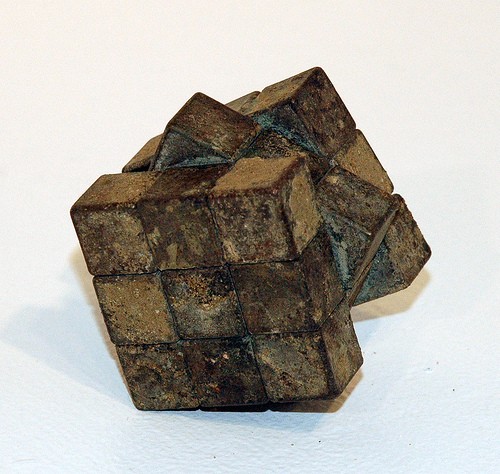 Following Incident 345-1, personnel are only allowed to solve one of the six faces of SCP-345; trying to solve all faces will result in reassignment to MTF Epsilon-8 ("The Midwives").

SCP-345 can be opened by forcibly pulling its sides apart. The cube is hollow, possessing a circular cavity 4.5 cm in diameter in its center.

If left open for 5 seconds, SCP-345 will automatically close and shuffle itself for two minutes. Afterward, it may be safely handled. Note that it will not be possible to force SCP-345 open after the shuffling takes place.

Solving SCP-345 is no harder than solving the common versions of the puzzle. However, if one of the faces becomes complete, one of the following situations may occur:

After one of the processes is over, SCP-345 can be opened again, and a sculpture made of the same material that was represented by the completed face can be found inside of it. The small sculpture will always be of a planet or planetoid 4.5 cm in diameter. These sculptures do not resemble any currently known planet.

If more than one face is completed at the same time, both corresponding processes will occur, one followed by the other. The statue created will be made of both materials; for instance, the sculpture created by completing the granite and obsidian faces at the same time had its "continents" made of granite, and its "oceans" made of obsidian.

SCP-345 was recovered by Agent █████ on ██/██/20██, ██ days after the eruption of the ██████████ Volcano in █████████, Ecuador. █████ claims to have found it near the base of the volcano, and took it as a curiosity. He learned about the true nature of the SCP after trying to solve it, suffering third degree burns in the process.

Incident 345-1 On ██/██/20██, while Dr. ████ tested SCP-345, she managed to complete all faces, by not opening the cube once a face was completed. SCP-345 proceeded to rumble for 3 minutes, after which it opened by itself. A small metal sphere, 4.5 cm in diameter, emerged from inside SCP-345, and hovered 3 meters from the ground. Shortly after, the sphere began rotating, accelerating to a rate of 5 m/s. Strong gravitational forces were detected in the vicinity of the sphere, visibly affecting objects up to 15 meters away. Seconds later, a dense orange liquid with an average surface temperature of approximately 4000°C began flowing from SCP-345, which proceeded to encompass the metal sphere. Afterward, another, denser liquid began flowing out of SCP-345. It also proceeded to encircle the sphere. This liquid continued to flow from inside SCP-345 until the sphere reached a diameter of 2.3 meters, at which point the flow stopped and SCP-345 automatically closed. The resulting sphere was still slowly spinning and hovering above the ground. It was extremely dense, and its gravitational pull was strong enough to severely damage its surroundings. The temperature at the surface varied between 900 and 1600°C.

30 minutes later, parts of the outermost "magma" began to cool down, solidifying into a thin rock crust. 20 hours later, most parts of the sphere were solid rock, with small "seas of lava" flowing between them. Little volcanoes and mountains could also be observed. At this point, a special containment team with heat-resistant equipment was moved in to relocate the sphere to a safer room. The sphere was later designated SCP-345-1. Studies regarding the probability of its eventual development of an atmosphere are underway.

Note: Although at first we thought that SCP-345 had created a copy of Earth, as of █/██/20██, studies have shown that it is unlikely that SCP-345-1 will develop an atmosphere, and the composition of its "magma" is very different from Earth's, containing far smaller quantities of silica and aluminium, and larger amounts of titanium. It is currently unknown if the "magma" of other planetoids created by SCP-345 would have a similar composition. Perhaps we should have a D-class complete it… preferably on an open field. — Dr. ████.