One Hundred and Fifty 3.5" Floppy Disks 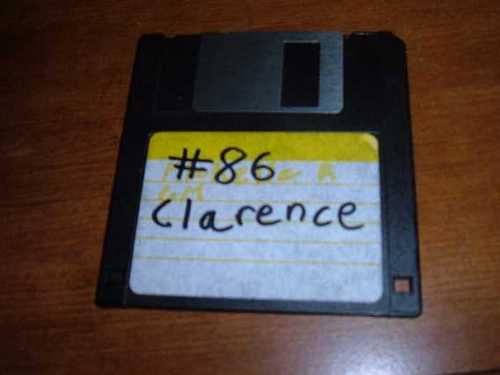 SCP-335 is to be kept in a secure location to prevent tampering.

SCP-335 is a set of one hundred and fifty 3.5" floppy disks discovered in a cardboard box found in the attic of former Agent ███ shortly after her termination. Each disk is individually numbered in hand-written permanent marker. Disks are to be referred to by their number; SCP-335-001, SCP-335-002, etc. Each disk has also been labeled with a human name in the same writing as the numbering. 118 are male names and 30 are female. There is some speculation as to whether SCP-335-011 "Jackie" is meant to be male or female. The names have no identified pattern.

Initial examinations suggested that all 150 disks were blank, as their capacity all read as 0 megabytes. Dr. ██████████ determined that the disks were ordinary and had them archived with the rest of former Agent ███'s possessions. It was not until Agent ████ suggested the unlikelihood of Agent ███ keeping a box of floppy disks in her attic among the other contraband, that Dr. ██████████ agreed to have the disks examined again. It was determined that Dr. ██████████'s original floppy disk drive had been defective, and a different computer was brought in.

All 150 disks appear to have an infinite amount of storage space available. It is unknown whether the disk space is truly unlimited or simply too large to measure; regardless, the space is effectively infinite.

Note from Dr. ██████████: I believe I know where all our bandwidth is going at night. Agent ████'s computer privileges should be limited until he either finds a girlfriend or learns some self-control.

Further investigation revealed that SCP-335-001 through 012 contained pornographic material. However, upon discovering the entire contents of Wikipedia on SCP-335-013, the actual nature of SCP-335 was uncovered.

SCP-335 contains the entire contents of the Internet stored within its infinite storage space. It appears to have some sort of organizational system, with similar sites grouped together on the same disk. Experiment 335-007a showed that when content on the Internet is changed, the content on the corresponding disk changes to match. Precisely how this occurs is unknown. It is uncertain what would happen if content on the disk were changed, as all 150 disks seem to be locked in read-only format.

Addendum: Agent ████ has proposed on numerous occasions that an experiment be conducted where a disk is destroyed. Dr. ██████████ as well as ███-███ agree that this could potentially have disastrous effects on a large portion of the internet and could draw unwanted attention to the Foundation. Such an experiment is not to be attempted under any circumstances.

Addendum: The following is a listing of all 150 names written on the disks in their numerical order. No pattern has yet been identified in the names.

Note from Dr. ██████████: Just some "points of interest" here.