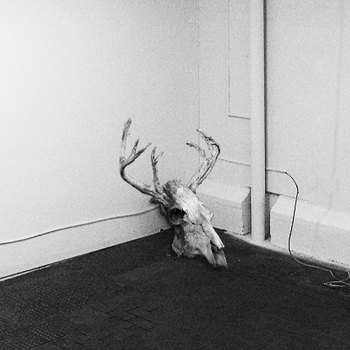 SCP-323 in a temporary testing chamber.

SCP-323 is to be kept in a 17m x 17m x 3m concrete containment cell in Site-91. The object is to be restrained in the center of the cell within a 1m3 container of 8.8cm thick transparent armor lined with one-way laminate, which is to be fit with one (1) electronically locked access port. This container is to be internally lit, with the surrounding cell kept dimmer to facilitate the one-way laminate. The cell is to be surveyed remotely at all times, and any signs of activity are to be reported.

In the event that SCP-323 breaches containment and an instance of SCP-323-1 is formed, personnel are to evacuate Site-91 and the site is to be locked down. Remote units are to be deployed to destroy the body of SCP-323-1; following this, armed personnel may be sent in to re-establish the containment of SCP-323.

SCP-323 is the skull of an unidentified cervid measuring 55cm long, 27cm wide, and 31cm tall, with a pair of antlers, measuring 35cm tall and 46cm from tip to tip, growing from the left and right sides of SCP-323. SCP-323 shows signs of damage consistent with outside exposure, with regular pitting, scarring and weathering across the object, bleaching on the upper surfaces and a missing lower mandible. The rear of the skull features an approximately centered ovoid gap, measuring 25 cm high and 23cm wide, giving access to an interior space 16cm deep. This gap shows signs of tool use, indicating that it was carved with tools, possibly stone.

SCP-323 displays the ability to react to aural, tactile, and visual stimuli. Testing has revealed SCP-323 appears to have a field of view similar to that of other cervids, and has responded to visual stimuli from up to 50m away. The targeting of specific members of personnel, various attempts to breach containment, and the violent reaction towards speakers of the French and English languages suggests a level of sapience; however, this is unconfirmed.

SCP-323 is capable of limited locomotion, typically in the form of small movements and vibrations. In most cases, SCP-323 will only locomote in the event of various stimuli, such as moving away when touched or turning when personnel are present within its containment chamber. SCP-323 has demonstrated the ability to make larger movement, such as lunging at personnel and repeatedly attempting to force its way through containment measures.

Within ten (10) minutes of putting SCP-323 on, SCP-323-1 will undergo drastic physical alterations. SCP-323-1 will experience a rapid loss of body fat, body hair, and pigmentation, followed by the rupturing of the distal phalanges from the fingertips, abnormal tooth growth, and the blackening of extremities consistent with frostbite. Additionally, SCP-323-1 appears to experience greater strength and pain tolerance than the average human; however; SCP-323-1 still appears to be as susceptible to physical harm as it was prior to its introduction to SCP-323.

SCP-323-1's metabolism will experience a dramatic increase, requiring a constant caloric intake, with starvation occurring anywhere between fifteen (15) to thirty (30) minutes if no self-preservation efforts are made. In order to sustain its increased metabolism, SCP-323-1 will actively seek out and eat other individuals for sustenance until expiration. In the event SCP-323-1 is incapable of finding plentiful nourishment, SCP-323-1 will make efforts to sustain itself, including limiting movement, rationing available food, and autocannibalism. SCP-323-1 will only feed upon humans; it is presumed that SCP-323-1 is capable of receiving sustenance from other sources, but chooses not to, despite availability or ease of access. During the pursuit of individuals, SCP-323-1 has been known to occasionally make various statements in the Severn Ojibwe, Potawatomi, and Cree languages, as well as in the native language of the instance. It is not known if these statements and the knowledge of these languages is the result of SCP-323's anomalous influence or if they originate from SCP-323 itself.

The sound of dragging can be heard, as SCP-323-1's voice becomes louder.

Several thumps can be heard, followed by a wet crack.

What is presumed to be SCP-323-1 eating can be heard, accompanied by what sounds like panting.

SCP-323-1 creates a loud vocalization, followed by a wet thump.

SCP-323 was recovered in 09/12/97 in the Bittern Lake reserve, part of the Lac La Ronge First Nation in Saskatchewan, Canada. ██████ █████, a small, unregistered community, had been sustaining an active SCP-323-1 instance by routinely murdering individuals and leaving them out as an 'appeasement'. Investigation revealed ██ individuals were involved, who were interviewed and subsequently administered amnestics, and a cover story involving an unidentified serial killer was propagated. SCP-323-1, at the time suspected to be the anomaly, died of starvation during its transfer to Site-91.

The recorded number of deaths does not appear consistent with the duration of the SCP-323-1 instance. It is suspected SCP-323 went through several instances of SCP-323-1 before containment; however, no irrefutable evidence supporting SCP-323-1's longevity has been uncovered.

Interview SCP-323-A: James Namagoose, an individual involved in the murders and sustaining of SCP-323-1 prior to its containment was brought in for questioning involving SCP-323-1. Mr. Namagoose remained unusually calm throughout and after the interview.

Following the interview and containment of SCP-323, Mr. Namagoose was administered amnestics and was reintroduced to his community.

Dr. ███████: Please state your name for the record.

Dr. ███████: Please state your involvement with the murders.

Namagoose: I helped move the bodies for the wendigo to eat.

Dr. ███████: What do you know about the object?

Namagoose: There is a story of the Cree men, back when fighting was common, who tried to control the wendigo, to give his people an advantage. It was just a story. The elders knew more, but we were safe, so we didn't ask.

Dr. ███████: When did you first encounter the entity?

Namagoose: One night I heard yelling all around the village. A warped man walked out of the woods, killed our friends right in front of us. Sometimes it would stare more than it would make to kill, try to talk to you. It whispered at me, "pe misto", "come and eat"'. It made me cold in my bones.

Dr. ███████: And then?

Namagoose: Then I felt like I could understand the warped man, the wendigo, and that we could leave with him like we all do when we pass. When I was made to kill, I thought of this and it calmed me. I didn't run.

Mr. Namagoose closes his eyes and exhales slowly. After a minute, he resumes talking.

Namagoose: It would look at me sometimes. I could hear him in my mind, I could feel him watching me from out of my own eyes. This helped me watch these people die, and I hoped it would pass on my family.

Final Note: No mental effects similar to what Mr. Namagoose stated have yet to be reported by staff who have interacted with SCP-323 or SCP-323-1. Further investigation into this is not planned; however, staff are encouraged to report any atypical thoughts or feelings experienced while working with either.