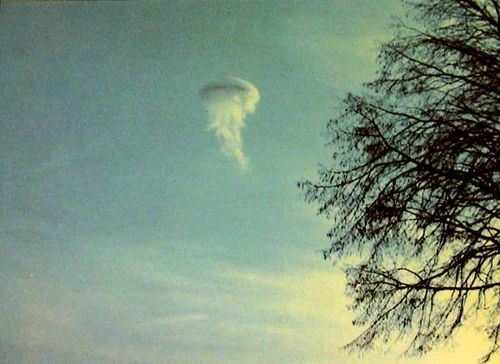 SCP-312 is kept in a large life-form containment chamber at Site-19. As it does not require feeding, only researchers are permitted access to the chamber. All personnel entering the chamber are provided with wide-brimmed hats and advised not to look directly upward.

SCP-312 is an organism composed of very thin tissue layers and filled with atmospheric gases at a slightly higher temperature than the surrounding air. It typically floats approximately ███ meters above the ground, although it will vary this in order to maintain its position relative to prey.

SCP-312 is capable of creating a small lenticular cloud around itself by releasing water vapor and manipulating air currents, and uses this as camouflage. Within the cloud, SCP-312 is visually similar to a large jellyfish, with a cap approximately two and a half (2.5) meters in diameter from which trails a tube of tendrils approximately twenty-five (25) meters in length.

SCP-312 preys upon large mammals and shows a strong preference for humans. While hunting, SCP-312 will stalk its prey from a position directly above, manipulating air currents around it to maintain this relative position. Prey can escape by moving at a speed upwards of thirty kilometers per hour (30 km/h) or by entering a large crowd, which seems to confuse SCP-312 and cause it to switch targets.

SCP-312's core is filled with a large cluster of eyes. The majority of the eyes are human in appearance, except for one large, central orb. The other eyes are connected to the central one by thin tendrils. This core can be observed through the tube of tentacles by prey looking directly upwards, or by a recording device above the targeted prey.

So long as this core remains unobserved, SCP-312 will remain docile, and seems capable of surviving indefinitely without feeding, although feedings do increase its mass and movement speed as well as the number [REDACTED]. However, if a prey animal makes eye contact with the core, SCP-312 will become active, generating a narrow, controlled vortex with the appearance of a long tube of cloud connecting the lenticular cloud above with the ground. The prey is pulled into SCP-312's tentacle mass by a strong updraft within the vortex, paralyzed by a venomous sting by the tentacles, then digested. Within about a week, partially digested remains of the prey will fall from the sky where SCP-312 disappeared. After a successful hunt, SCP-312 will drift aimlessly until another prey creature comes nearby.

Based on incident reports, the Foundation believes there are at least three (3) uncontained instances of SCP-312 in the wild. Recovery efforts are difficult because SCP-312 often follows a single person for months or years before its effect is triggered.