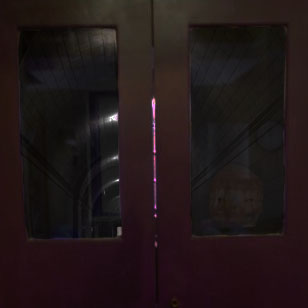 As SCP-303 has not yet been known to travel beyond the boundaries of Site ██, the entire area of Site ██ is currently considered SCP-303's containment area. All rooms in Site ██ are to be altered where possible so as to have two entrances separated by a distance of 10m or line of sight. Personnel are to be distributed evenly throughout the facility, with available radio or intercom contact, so that encounters may be resolved quickly. Personnel who witness SCP-303 are to be submitted for immediate psychiatric evaluation.

Witnesses describe SCP-303 as a nude, sexless, emaciated humanoid figure with reddish-brown skin. Instead of normal facial features, its head is dominated by an extremely large mouth, which bears a set of oversized human teeth. It continually vocalizes a wheezing noise, loud enough to be heard from the other side of most solid doors. All individuals who have had encounters with SCP-303 are capable of describing it in full, including individuals who have not physically seen any part of it.

SCP-303 will periodically materialize behind any closed door, hatch, or other entryway barrier opposite a sentient observer, chosen by unknown means. SCP-303 will then remain behind the door for an indeterminate amount of time. Any individual attempting to open the door or barrier experiences intense, paralyzing fear that lasts until SCP-303 dematerializes (either on its own or to avoid being directly seen by another observer). The source of this fear is not clear, but appears to be similar in nature to arachnophobia and ophidiophobia, originating on a pre-conscious, genetic level. [DATA EXPUNGED] analysis indicates that SCP-303 is not, in fact, purposefully inducing fear in the affected individuals.

SCP-303 does not allow itself to come into direct visual contact with any observer, and has never allowed any one individual to view more than 10% of its form. When the door or other entryway barrier is partially or completely transparent, SCP-303 will materialize in an orientation that leaves 10% or less of its body visible, or cause effects of fog or frost on the transparent surface to achieve the same effect. If SCP-303 is approached from a direction in which there is not a solid object or door breaking line of sight, it will dematerialize before direct visual contact is made.

Any electronic or complex mechanical devices that SCP-303 encounters are temporarily disabled. SCP-303 has made no recorded attempt to physically or verbally engage any observer.

How SCP-303 arrived at Site ██ is not known at this time. SCP-303’s first recorded appearance was on 3/1/10. It is suspected that SCP-303 was inadvertently transferred along with or manifested by another SCP on-site. All SCPs on Site ██ are being reexamined accordingly.

Incident 303-1: Agent ████████ was showering in her private quarters bathroom when she became aware of the presence of SCP-303 on the opposite side of the shower curtain. It was wheezing extremely loudly. Startled by the discovery, she accidentally struck the shower curtain, causing it to sway outwards. The curtain partially wrapped around SCP-303, revealing that it was less than 0.5m from the curtain, standing erect and facing the shower. Agent ████████ reports spending approximately the next 3 hours sobbing in the shower, quietly, as not to disturb SCP-303. Agent ████████ reported that the wheezing stopped very suddenly, at which point in time she was able to exit the shower.

Note: This is the first recorded instance of SCP-303 removing an object from a scene.

A team consisting of Dr. ████████, Researcher ████████, 4 security personnel, and 4 D-Class personnel were assigned to be dispatched to any reported incident of SCP-303’s materialization in order to immediately perform on-site testing. These logs take place at the door to room ███ from the first floor hallway. SCP-303 was reported to be within room ███.

Test 303-1: One (1) male D-Class personnel, D-303-1, was ordered to open the door and threatened that he would be transferred to SCP-███ duty for non-compliance. He refused, citing extreme fear.

Test 303-3: One (1) female D-Class personnel, D-303-2, that had witnessed the termination of D-303-1, was ordered to open the door and threatened that she would be terminated on the spot for non-compliance. She refused, claiming that if she opened the door that SCP-303 would [DATA EXPUNGED]. Researcher ████████ was visibly shaken by this claim. D-303-2 was not terminated.

In addition to this, a number of classified materials have been obtained by SCP-303. Staff are still attempting to determine what specific purposes SCP-303 may have for these materials.