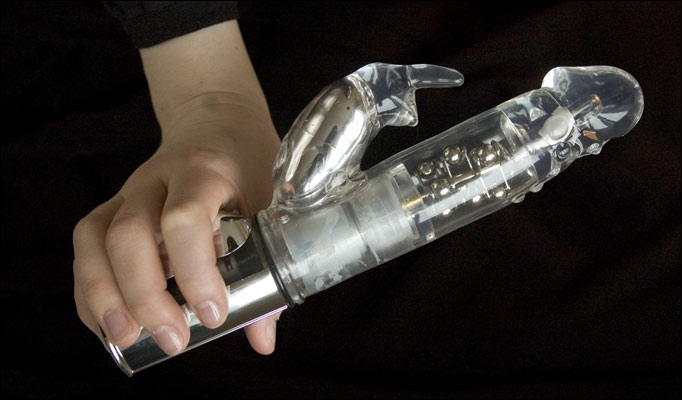 SCP-297 is to be kept in a standard lockbox at Site 19's High Value Item Storage Facility. Standard positive-action defenses (explosive, chemical, biological, and memetic) are to be in place at all times, according to standard operating procedure. Personnel wishing to utilize SCP-297 for experimental or field purposes must fill out a Form-32 and submit it to the head of Research and Containment.

In addition, the standard power/intensity controls have been altered from the normal on/off switch with secondary intensity dial, to a single five-stage selector switch. The bottom four intensity levels (off, low, medium, high) appear to be within normal parameters for such a device, and can be used safely for such purposes if so desired.

When turned to the highest intensity setting (labeled "suicide"), SCP-297's vibration frequency swiftly increases to upwards of 200,000 kHz. If the upper portion of the device is touched to any solid material, SCP-297 will change frequency to one that causes a positive harmonic feedback loop in the object, causing the object to lose cohesion within sixty seconds of continual contact. This invariably kills organisms that it is exposed to.

Experimentation has determined that SCP-297 can disintegrate a 1 meter cube of concrete into powder within ten seconds. The time required for other objects varies, based on the density and harmonic properties of the material. Due to the similarities between the effects of SCP-297 and SCP-1012, investigation into whether both effects are variations of the same phenomena are ongoing.

Addendum: Circumstances of Retrieval: SCP-297 was retrieved from the third basement of the parking structure of a thirty-story apartment building in Los Angeles, California, on ██-██-████. According to eyewitnesses, the device bored a vertical hole through the entire building's northwestern corner, starting from the 30th floor and proceeding, floor by floor, through the entire structure, until a maintenance worker neutralized the device by turning it off. All witnesses were detained and administered Class A amnestics, and the device was retrieved by Foundation personnel. A large quantity of organic slurry (later identified as a liquefied human body) was found on the thirtieth floor, at the upper limit of the damage.