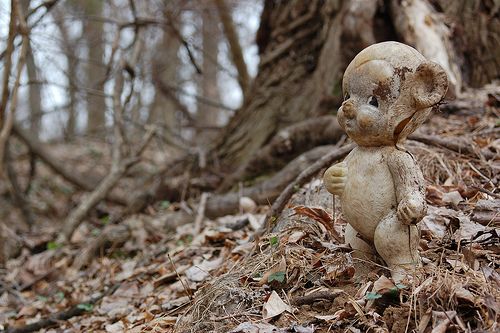 Anyone interacting with items affected by SCP-293 must do so only in 30 minute shifts, with one week of time separating each interaction. This includes physical handling, observation (both physical and via camera or other recording device), testing, and any other activities that bring an SCP-293 affected item into contact with human beings.

All staff working with SCP-293 affected items must submit to a psychological evaluation three times per week, to begin two weeks before interaction, and extending for three weeks after the end of interaction. Staff must also submit to any additional test as ordered by Site Command. Anyone found to be affected by SCP-293 will be placed in quarantine, and the item causing the effect is to be immediately destroyed.

Any items used to interact with SCP-293 affected items are to be disposed of after one week.

SCP-293 is currently held to be some form of intangible force or presence. Questions have been raised regarding a possible intelligence behind SCP-293 in light of subject’s reactions; however, these are still unfounded. SCP-293 is most visible in its effect on human behavior, and is only detectable in very advanced cases as a very slight auditory disturbance. This lack of presence forms the major issue with SCP-293 detection, as it is almost impossible to detect if items or people are “infected” by SCP-293 without long-term observation.

SCP-293 “bonds” to physical items, in most cases small, lightweight items; however, larger items, such as cars, trees, and, in one case, a two-story residential home, are not unknown. SCP-293 will spread to new items if they are left in close (2 meters or less) proximity for several weeks. SCP-293 does not appear to “bond” living things and its effect is only visible in humans. It is unknown how SCP-293 spreads to new items, or what the criteria are for an item to be “bonded”; however, there appears to be a higher probability of “bonding” for items that can be easily carried/transported in a human hand.

SCP-293 causes those affected by it to become progressively obsessed with the item it is “bonded” to. This process appears to be accelerated by observation and physical contact with the item affected by SCP-293. Subject will rapidly become withdrawn and antisocial, and react violently to anyone attempting to touch or remove the item. Subject’s actions toward the bonded item will begin to take on “parental” aspects in 78% of cases, with the subject rocking, cleaning, and attending to the object as if it were not an inanimate object. Attempts to interrupt these rituals or bring attention to the inappropriateness of this behavior will cause the subject to enter an extreme state of fear, depression, or anger, which persists for an extended period of time.

In many cases, the obsession and ritual cycle of SCP-293 will grow to the point where the subject is unable to function normally, needing constant contact with the SCP-293-bonded item. Subjects will show a marked and progressive impairment of performance in simple tasks, such as preparing food, engaging in personal hygiene, or sleeping. In the 22% of cases with non-parental attachment with SCP-293, subjects may also begin to engage in personal abuse and damage, believing they are being ordered to do so. Mental and physical degradation in both cases are often directly related to cause of death.

Attempting to remove the item from the subject will cause the subject to enter a violent, fearful, depressed, hysterical, or one of many other mental states. These “episodes” are nearly impossible to end, except by the return of the item, or several months of separation. Subjects will become more and more erratic and hysterical the longer they are separated, and will violently attack others to re-acquire the item. Subjects will often commit suicide after several days of separation from, or loss of, the SCP-293 affected item.

The Foundation currently has 182 items affected by SCP-293 in storage. It is unknown at this time how many items worldwide may be affected by SCP-293, and questions have been raised as to SCP-293 and its possible relationship to several other SCP items and the exploits of some serial murderers.