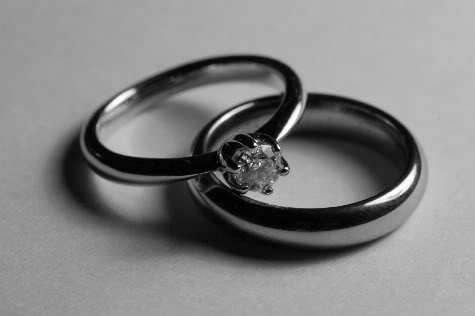 SCP-288 is to be kept in a locker, with only security personnel of level 2 clearance or higher given the combination. They are currently contained in the small, velvet-lined black box they were retrieved in.

Personnel who have worn the rings during testing are to undergo full psychological exams afterward, and their experiences recorded.

SCP-288 consists of a women's engagement ring (hereafter referred to as SCP-288-1) and matching men's band (hereafter referred to as SCP-288-2), both silver in appearance, the ring containing a small diamond. They are relatively plain, and bear no marks as to their origin or make, but staff routinely describe them as seeming like "very nice wedding rings, if a little plain." They are completely normal in every sense, and have been damaged by endurance testing (and subsequently repaired through typical jeweling practices), and their effects are only observable while worn.

When SCP-288-1 is worn by any adult female in a relationship, she immediately becomes what has been portrayed in popular media as an "ideal housewife". Women describe this experience as if they are not in control of their body, merely observing their own actions. They lose all ability to form their own opinions, and instead automatically agree with the opinions of their spouse, and display very few negative emotions, if any. They seem to gain an instinctive knowledge of cooking and baking, in the style considered to be the "traditional American" style, including such dishes as apple pie, or macaroni and cheese. These dishes are always professionally made regardless of prior skill. A similar knowledge is evidenced in the spheres of cleaning and light repair; subjects regularly display the ability to sew and knit even if they were not able to do so before donning SCP-288-1. Along with this knowledge, they feel an innate urge to cook, clean, and mend things around their home incessantly; they lose the will to have a job of their own and become exceedingly obedient and loyal to their spouse, as well as religious and authority figures. Many wearers of SCP-288-1 exhibit a fondness for rather modest dress, and are uncomfortable when wearing pants or more revealing clothing. They also develop a fondness for children, and if they do not already have children, express the urge to have them.

When SCP-288-2 is worn by any adult male in a relationship, he undergoes a similar change, taking on the characteristics of popular media's portrayal of an "all-American dad", whether or not he has children of his own. Men describe the experience similarly to women, in that they feel they are not in control of their actions. He shows loyalty and obedience to political, religious, and authority figures, and an innate duty to his current professional management structure. He will work exceedingly long hours without complaint, and maintains an upbeat and motivated demeanor at his work. No matter the nature of his former personality, he becomes friendly and easy to approach, good with kids and fiercely loyal to his spouse. He is always willing to help around the house and willing to please with a shoulder rub. Men with children become attentive, engaged fathers, and men without children express a strong desire to have them.

When used collectively, SCP-288 seems to recreate a model of a "Stepford Marriage". While this seems ideal and relatively harmless, SCP-288 has been responsible for numerous crimes, including spousal abuse, murder, and suicide. Both women and men report feeling trapped while wearing SCP-288, and out of control of their own life. After extended periods of wearing SCP-288, they often have intense feelings of depression and personality displacement. On a more sinister note, somebody wearing either instance of SCP-288 will take virtually any manner of abuse from a spouse without a word or raising a hand to defend themselves.

The potential for SCP-288 to create a "domestic slave" proves disturbing to some and seems useful to others, and records show that is has been used in such a fashion before. [See Addendum 288-A]

Preliminary testing of SCP-288 has proved inconclusive - the rings themselves display no physical anomalies compared to a normal wedding ring of similar type. It is theorized that the rings profile their subjects memetically, drawing on the experiences present in the subject to influence their behavior upon activation. This theory is supported by SCP-288's ability to differentiate subjects based on their self-perception of gender, rather than their physical sex.

SCP-288 was discovered by Dr. Rights in [DATA EXPUNGED]. Thankfully, her boyfriend grew wary of her extreme mood changes and called the Emergency SCP Contact number she had left for him, delivering SCP-288 into the Foundation's hands.

"I'm just glad I got suckered into it before somebody else did…even if it was horrible."
-Dr. Rights

It should be noted that both instances of SCP-288 resist being separated, and wearers may feel compelled to buy or even steal the rings in order to keep them nearby.

Addendum 288-A It has been revealed through extensive backtracking of SCP-288's history that it has caused five instances of homicide, three suicides, and two (reported) cases of spousal abuse. It has regularly resurfaced in pawn shops across the United States for at least 80 years, though all attempts to track it past the early 20th century have failed to reveal further evidence.