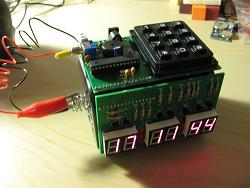 A component of SCP-281 during a reverse engineering attempt

SCP-281 is currently contained within maximum security storage locker 18-E on level 7 of Research, Reliquary, and Containment Site-76. SCP-281's lithium-ion battery pack is to remain plugged into the site's main power grid unless used in testing. Necessary cables have been supplied and are stored with the object.

Because of the nature of the object's anomalous properties, testing on SCP-281 is to be authorized by the Level 4 senior member of research staff currently assigned to this project. D-Class personnel used in testing are not to be informed on the nature of SCP-281.

SCP-281 is a makeshift device measuring approximately 25 cm x 35 cm x 20 cm. Built into the device is a high capacity lithium-ion laptop battery to provide power. In addition, the object incorporates a variety of components from such diverse sources as a Philips brand alarm clock, a digital kitchen timer of unknown make and model, a NEC PC-8201a portable computer and a USB keypad (brand unknown). Attempts to reverse engineer it have thus far not yielded any significant results. SCP-281 is currently not believed to be functioning as intended by its creator.

SCP-281's effects become apparent when the following tasks are performed in the correct sequence:

2. Subject waits for the alarm to sound and presses the alarm clock's snooze button

The depression of the snooze button triggers the creation of a localized temporal anomaly around SCP-281. The area affected is a spherical field with an approximate radius of six meters, centered on SCP-281 and designated SCP-281-1. Personnel and items outside this anomaly are not affected in any way. How the device creates the temporal anomaly is unknown at this time. The kitchen timer component of SCP-281 will display 9:00 when SCP-281-1 is created and begin counting down. Setting the kitchen timer to any other amount of minutes or seconds prior to activation does not appear to have any effect on SCP-281's functioning.

Within SCP-281-1, time passes at a highly increased rate, with nine minutes lapsing inside it compared to approximately one millisecond outside. From the perspective of those inside the temporal anomaly, time moves at a normal rate while outside of SCP-281-1 time appears to have effectively stopped.1 Subjects within SCP-281-1 can move around within its limits, but attempts to have subjects cross from an active instance of SCP-281-1 into an area beyond its influence have invariably resulted in subjects undergoing massive and acute cellular disruption along the line separating those parts inside and those outside of SCP-281-1. A similar effect has been observed on subjects and objects brought into an instance of SCP-281-1 from outside its area of effect. It has proven possible to move SCP-281-1 by transporting SCP-281 to a different location while active, but any materials, biological or otherwise, immediately suffer a massive cellular and molecular disruption as described above. Any organic material present within SCP-281-1 when the device is activated is subject to normal biological processes over the period of time that lapses inside SCP-281-1.

To those outside of SCP-281-1, no time appears to have passed. If subjects present in an active instance of SCP-281-1 have moved during the period of time SCP-281-1 was active, they will seem to have teleported to their new location.

As the timer reaches zero minutes and zero seconds, the alarm sounds again and time inside and outside of the instance of SCP-281-1 are instantaneously resynchronized. Due to the abrupt nature of this event, subjects inside SCP-281-1 when the nine-minute period expires, suffer effects resembling severe decompression sickness. Known treatments for that condition have been proven to be equally effective in treating SCP-281 test subjects.

On ██/██/20██ a remote monitoring station picked up encrypted transmissions emanating from a location in the █████████ Mountains. After decryption, the transmissions were found to be reporting progress on a project referred to as 'Full Circle' and SCP-281 was secured by a Foundation airborne recovery team during a raid on a fortified hiker's cabin. The device's creator, a 36-year-old African American male identified post-mortem as █████ █. ███████, exhibited erratic and aggressive behavior when encountered. No evidence exists of an affiliation with any known GOI or other organization.

Footnotes
1. This effect is similar in nature to the WonderZoom feature of SCP-2445. While no link between the creation of these objects is believed to exist, examination of this documentation provides further insight into the nature of paratechnological temporal distortions.
SCP-280 SCP-282