A Coat of Many Arms 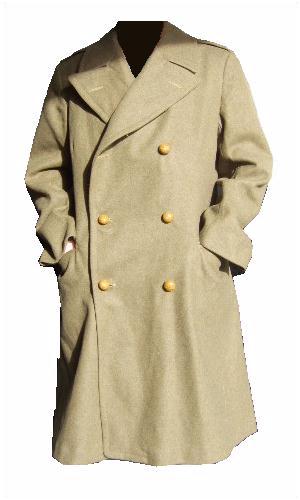 Currently, SCP-262 is undergoing review and research to see if it is capable of being used by field agents in the acquisition of other SCPs. Monitored use by commander level authority is preferable. It is inadvisable to allow agents unsupervised usage of SCP-262 at this time. When not in use, SCP-262 is kept in a climate-controlled room at Site ██, guarded by at least two Level-2 Security personnel.

SCP-262 is a light brown, European military-style greatcoat from a period between the late 1500s to the early 1900s. It is without any specific designations or markings, leading researchers to believe it was an original archetype sample, intended to be submitted to military officials for approval as part of a new uniform design. The pattern was either rejected or lost because it was never implemented. It is made of wool and extends below the knee on most individuals. Carbon dating of the coat fibers has been inconclusive, placing the age of SCP-262 in the range of 6,200 to 6,400 years old. One explanation is that the wool used to create SCP-262 is perhaps thousands of years old, but the coat itself was cut, sewn, and assembled recently.

SCP-262 is capable of manifesting numerous arms from within the dark inner lining. When worn, any subject wearing SCP-262 needs only to open the coat to materialize hands and arms which are somewhat under the subject's control. Most limbs are human in nature and vary in skin tones, length, and strength. A noted few include:

The space under SCP-262 is considered to be non-Euclidean in nature and the coat itself divergent from normal dimensions. In one instance, test subject 402M was told to put SCP-262 over his head. Upon doing so, SCP-262 fell to the ground as the Class-D personnel disappeared under it. Some time later, fingerprinting of objects that have come into contact with the limbs of SCP-262 have identified one of the arms as that of subject 402M.

Subjects properly wearing SCP-262 are able to manipulate these arms with a varying amount of control. Test subject 301F was able to perform multiple tasks at once even while unaware and blindfolded, leading researchers to believe that SCP-262 has both perception and awareness of its surrounding even when the subject does not. Some believe SCP-262 to be fully sentient, due to observing SCP-262: