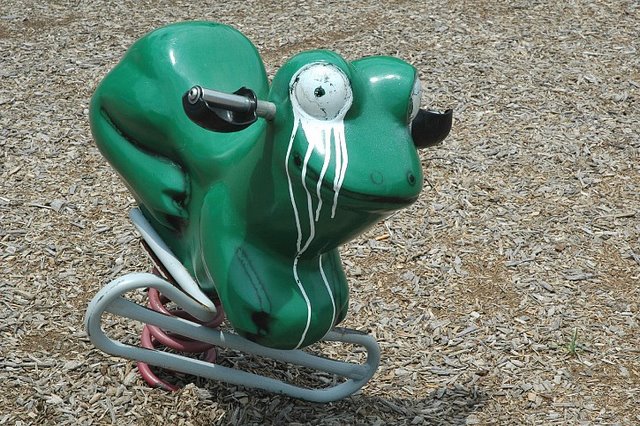 SCP-258 prior to acquisition in █████████, Maine

SCP-258 is to be kept in a standard storage vault with a keycard lock to be accessed only on approval from the supervisor of Site 15. SCP-258 is to be stored in a 2m x 2m basin, which is to be emptied twice a week by approved D-class personnel. All personnel interacting with SCP-258 are to be rotated no less than twice a month. While using SCP-258 is not directly harmful in any way, all who have utilized it have expressed a desire to do so again, ranging from the wistful to the vehement. All personnel interacting with SCP-258 are to be screened for underlying mental instability.

After Incident 258-1, cleaning personnel are to be issued light hazmat suits while interacting with SCP-258.

SCP-258 was recovered from ██████████, Maine after parents of local schoolchildren reported that stories of a 'sad bouncy frog' their children had been spreading were true. Agent F███ confirmed the nature of the object and Foundation personnel replaced it with a replica without incident.

SCP-258 appears to be a simple bouncing playground rider, seemingly designed to fit children of elementary school age and shaped like a stylized green frog with rotating handles on either side of its head. SCP-258 has milky-white eyes with what appear to be streams of white paint running down its face, as though it were weeping. Numerous attempts have been made to remove this substance from SCP-258; the green paint comes off with normal paint removal techniques, but the white substance, hereafter designated SCP-258-1, cannot; it only fades with time, observed to depend on various factors including length of time utilized and the extent of the emotional burden 'relieved'.

SCP-258 constantly appears to 'weep' streams of SCP-258-1, at a constant rate of approximately 0.12 liters per hour. When a subject sits on SCP-258, grasps its handles, and begins rocking back and forth, they report that a feeling of peace and contentment washes over them; the 'eyes' of the object then begin leaking SCP-258-1 at an accelerated rate, relative to the effect it has on its user's state of mind. Though this substance cannot be removed from SCP-258 once the seat is vacated, it remains in liquid form during use, and will drip from the object onto the ground. Testing of this material afterward has determined it to be a mixture of plain white paint, human tears, and skin secretions of the American bullfrog. How SCP-258 generates SCP-258-1 is unknown. The direct effect of SCP-258 only lasts for as long as the subject remains seated, though several subjects suffering symptoms of chronic depression have reported a lasting positive effect, resulting from some 'insight' they gained while riding SCP-258.

Repeated use of SCP-258 by a subject has shown to be mildly addictive, and Agent W████████ had to be restrained and struck before regaining self-control. The results of allowing mentally unstable subjects access to SCP-258 is unknown, pending further testing, though it is likely that any subject suffering from severe depressive symptoms would cause SCP-258 to produce uncontrollable amounts of SCP-258-1.

Addendum 258-1 After D-3354 committed suicide following repeated skin contact with SCP-258-1, the direct effects of contact with the substance were reexamined. Continuous skin contact with the fluid appears to transfer some of the emotions suppressed during use of the SCP, and the prior user was reevaluated, revealing she was recovering from [DATA EXPUNGED].