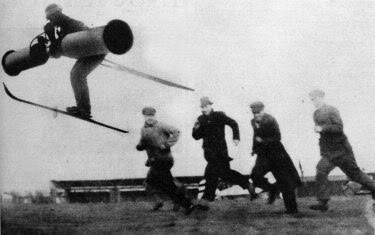 SCP-240 being used prior to initial containment, by members of the Morsum Space Society

SCP-240 is to be kept in the Secure Artifact Storage Facility in Site-77. Due to its age and delicate construction, SCP-240 is to be contained in a vacuum sealed container with humidity and temperature levels constantly monitored and controlled. The mouthpiece is to be permanently covered. No subjects are permitted to enter SCP-240's containment chamber.

SCP-240 is a vehicle capable of air travel. It is constructed from a wooden snow ski the user places their feet upon, a mouthpiece connected to a pipe device, and two steel drums welded to the sides, which also allow for exhaust. The words "Morsum Kite" have been painted on the bottom of the ski. The words "From many, comes might" has been embossed on both sides of it.

When activated, SCP-240 is capable of flying for approximately twice the duration of the user exhaling into its mouthpiece. Following this, it will enter a slow descent and ultimately land. Although it can only take off from land, testing has shown that SCP-240 is capable of landing on water and heavier-than-air gases.

For every 1N of force the user exerts into SCP-240, there will be 50N of thrust in return. It produces dust emissions within the barrels. These emissions contain minerals such as nickel, copper, gold, platinum, potassic feldspar, and Pyroxferroite. However, the steel drums do not appear to have any connection to the mouthpiece or piping. Additionally, users utilizing SCP-240 have occasionally reported tasting ammonia, sulfur, and having hot gas rush cause severe lung discomfort. Post-test medical examinations have not shown any corroborating damage to the subjects' bodies.

SCP-240 was discovered in 1927 in the possession of the Morsum Space Society, an organization dedicated to astrological research, following a raid on their headquarters due to bootlegging charges. Notes recovered during the operation indicated the bootlegging had been done to finance SCP-240. It was found inside the home and taken as evidence by the UIU. Its extranormal capabilities were not discovered until three years later, when an evidence clerk casually blew into SCP-240 and was thrown across the room, suffering a broken nose and three fractured ribs. SCP-240 was immediately transferred to the Foundation while a nonfunctional replica was handed over to the UIU. Due to the age and relative obscurity of SCP-240, it was not difficult to manufacture documentation discrediting it as a hoax.

Addendum: Utilizing fiber optic camera technology, Foundation researchers were able to place cameras within SCP-240's mouthpiece during flight. Over the course of the examination, the camera recorded a location in space which appeared very similar to the solar system. However, the Earth and Moon were missing and Venus had several possibly artificial satellites around it. All orbits were moving notably faster, at a scale similar to the scale of the input/output of SCP-240. Further testing is currently being conducted.