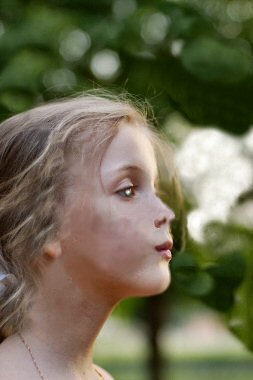 SCP-239 is to be kept within a one room cell furnished with 1 (one) bed, 1 (one) EKG machine, and 1 (one) IV to be filled with pentobarbital mixed with [DATA EXPUNGED] to be refilled daily. Under no circumstances is SCP-239 to be removed from her containment area at any given time. The walls of this cell are to be coated in a telekill-lead alloy. Only Class 2 personnel are allowed any contact with SCP-239 at any time. All personnel guarding SCP-239's containment area are to be equipped with Telekill headgear (SCP-148). Subject's proper name is Sigurrós Stefánsdóttir. Under absolutely no condition should the subject ever be awakened. Any personnel found attempting to awaken the subject will be immediately terminated.

SCP-239 appears to be an 8-year-old girl, 1 meter in height and 20 kilograms in weight. Subject has shoulder-length blond hair. Upon closer inspection, the subject's eyes "shimmer" a gray-green shade. Subject seems to emit a previously undiscovered form of radiation, which has been named ███████████. These waves seem to be harmless in low concentrations but in higher concentrations they could break down matter on a subatomic level.

SCP-239 seemingly has the ability to do whatever she expresses a will to do. Put simply, the subject can do anything that she truly wants to do on a basal psychological level as long as she is conscious. Fortunately, she only seems to be able to affect herself and her immediate surroundings; therefore, "If she can see it, she can change it." It would not be the most prudent course of action, however, to try to test how powerful she can be. She seems to be able to create and affect living matter; for example, when a D-class personnel accidentally caused her harm, she simply wished him away. Fortunately, when the subject was made to feel guilty for what she had done, she wished him back. SCP-239's self-preservation instinct makes her virtually invincible while she is conscious. Subject's skin can not be punctured by anything excepting SCP-148.

As a method of controlling the subject's ability, she has been told that she is a witch. This, besides improving morale greatly, makes her believe that she is unable to use her abilities outside of a pre-approved list of "spells" given to her by the SCP Foundation. This will hopefully prevent any and all attempted escapes. However, the subject is to be kept calm at all times to prevent any subconscious wish of harm to herself or others.

Origin: SCP-239 came to to the attention of the Foundation very soon after her birth in █████████, ███████. Approximately three hours after subject's birth, ███████ █████ Hospital was destroyed by an unexplained explosion. The press was informed that it was due to a gas leak. SCP teams were dispatched shortly to search the site for any abnormalities. The only living person they were able to locate was SCP-239. For the next eight years, the subject was raised under SCP care.

As of ████████ █, 20██, Subject is to be kept in a medically induced coma until further notice. This decision was made by [DATA EXPUNGED].

SCP-239 is permanently contained in Site-17.

Note from Dr. ████████, dated 12/26/04: Who the hell thought it would be a good idea to tell her about "Santa Claus" and then tell her that it was just a story?! Now we have another potential SCP to deal with, but we can't catch him because he is "magic".

Dr. A. Clef's Report: My analysis of the situation has led me to the conclusion that SCP-239 is an unacceptable containment and security risk. Although several proposals have been made re: using her for containing other SCPs, the example of SCP-953 and others must serve as a stark reminder of the risks of overestimating the Foundation's ability to control SCPs with reality-altering powers.

I would therefore like to make the following proposal: a piercing implement will be constructed of SCP-148, capable of penetrating SCP-239's otherwise impenetrable skin. This tool will be used to kill SCP-239 while she is asleep and her powers are neutralized. Because of the danger of SCP-239 awakening and resisting termination, it is my recommendation that the selected operative carry SCP-668 as well, in order to minimize complications.

One of the dangers of this procedure is the possibility that SCP-239 will awaken and perceive the operative as a friend or "good person," thus changing reality to match. It is for this reason that I would like to volunteer to carry out the procedure personally. A review of my personnel file should indicate that my [DATA EXPUNGED] should allow me to carry out the operation even after a reality shift of this nature.