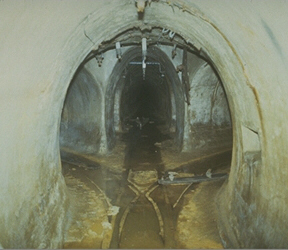 SCP-238 is currently contained by the original means. Current SCP protocols have proven unable to fully contain SCP-238. All exploration of SCP-238 is suspended until full, sustained containment has been achieved. Any and all personnel attempting to enter SCP-238 are to be physically restrained and moved to an outside containment area. Upkeep of the current barrier is top priority, and a minimum of two personnel are to be present at all times for upkeep and security.

No testing, samples, or exploration may be conducted within SCP-238 until full containment of SCP-238 has been achieved, or with approval by Site Overwatch. Any and all persons entering are to be deemed missing, presumed dead.

SCP-238 is an enormous underground facility, with a single entrance on the island Shmidta to the extreme north of Russia. Tunnel networks have been shown to extend for thousands of kilometers, with major "Junctions" under [DATA EXPUNGED]. "Oceanic Junctions" have also been observed to include several connections to [DATA EXPUNGED]. When originally found, the entrance was sealed behind a massive wall of bricks, covered in carvings. This wall was removed, and exploration began. Initial tests showed that the walls of SCP-238 were primarily fossilized tissue of unknown origin. Several structures within the facility led initial exploration teams to conclude that SCP-238 is or was at least half biological.

Shortly after discovery of a central chamber, reported to consist of partially rotted flesh and badly decayed metal structures, personnel began to disappear, and numerous accidents claimed eight lives. "Noises" and other hallucinations were reported, along with ████████, and other [DATA EXPUNGED].

Eight containment walls and associated personnel were destroyed by unknown means, with a survivor reporting "███████ ███████" (unconfirmed), in addition to rapidly escalating aggressive phenomenon by SCP-238. Replacement of the original wall has contained the item effectively, but new SCP containment and research strategies have been requested, as the current containment prevents in-depth exploration and experimentation.

Upon the escape of six juvenile instances of SCP-1013, the local SCP Team assigned to SCP-238 reported SCP-1013 squeezing through the original wall and entering the underground chambers. After O5-█, O5-█, O5-█, Dr. ██████, and Dr. ██████████ were notified, they elected to send in a single team to retrieve SCP-1013. Further information regarding the expedition is found in document 238-S7-A, with clearance level three (3) required. The end result of the retrieval team were six dead, two critically injured, one missing in action, and the six juvenile SCP-1013 instances being re-captured. Further research into SCP-238 will be carried out by Dr. ████ and his research staff, under SCP supervision.

Personnel D-299: I don't see nothing, not that damn thing we're lookin' for, not that fucking suit that was supposed to watch us, not even a god damn exit!

Agent ██████: You will hold your comments, Agent █████████████ is currently covering the central chamber so nothing can escape. Personnel D-299: -carry on like a fucking boy scout-

Agent ██████: Shut the hell up you idiot! There's movement up ahead.

(Sounds of scraping and grinding are heard)

Personnel D-299: …that don't look like number ███, but that ain't natural..

(Sounds of gunfire are heard)