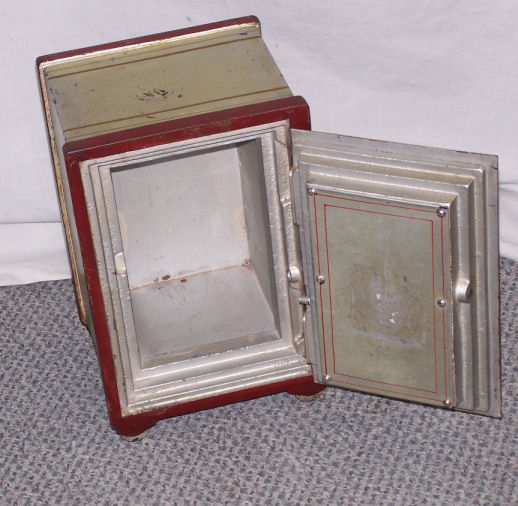 One of the many compartments of SCP-216

SCP-216 is a 35.6 cm (14 in) high iron safe with a multiple-dial combination lock. The lock has 7 dials each with numbers ranging from 0 to 9. The combination cannot be changed while the door is open. The weight of the device appears to fluctuate in an obtuse manner (see document 88-B).

The door of SCP-216 can always be opened, but the accessible interior space appears to change depending on the currently entered combination. Objects placed inside SCP-216 may be accessed by re-entering the combination that was configured when the object was inserted. Objects retrieved from SCP-216 appear to be undamaged by the device.

It is speculated that every possible lock combination results in a different interior, and that there are therefore 10 million available compartments. It is unknown how many objects currently reside inside SCP-216.

An engraving found on the bottom of the safe reads "3/4". It has been hypothesized that the compartments of SCP-216 are shared with three other devices of a similar nature. This hypothesis is consistent with the findings reported in document 88-B.

Testing the effect of inserted items on the SCP's total mass.

Testing shows that SCP-216 takes on approximately 25% of the mass of its contents, suggesting the mass is distributed evenly between SCP-216 and the three other hypothesized devices.

Compartments 0000332 - 0000398: Each compartment had a body part from █████ ███████, a 28-year-old female who had been reported missing on ██/██/20██. Contents removed for identification and then incinerated. Liver, spleen, and lungs not recovered.

Compartment 0000409: A live wolverine (Gulo gulo; adult male) with a mass of 30 kg. Upon the door being opened, it attacked and killed Dr. ███████ and mutilated two nearby D-class personnel before being shot five times by guards. Autopsy of the wolverine revealed no anomalies.

Chamber 0000501, confirmed to be empty, had one (1) standard Foundation GPS unit placed inside it. When the chamber was sealed, GPS failed. Data from the unit upon retrieval showed that the satellite was unable to confirm source location during this time.

On 04/16/██ all previously checked compartments were opened with the intention of confirming contents. When compartments 0000332 to 0000398 were opened, individual body parts were found corresponding to an unknown male, arranged in the same order as found in experiment 152-D, including the liver, spleen and lungs. All previous traces of tissue from experiment 152-D, which had not been cleaned, were found to have been sterilized from these compartments. Pursuant to request for O5 directive, body parts were placed back into their compartments. Containment procedures currently under review.

Upon viewing the recorded footage, Dr. █████ suffered from a transient ischemic attack.

The recorded footage shows Dr. █████ placing the videocamera inside the safe and closing the door. No time passes before the door is re-opened and the videocamera is retrieved from the safe. This is inconsistent with the scene reported by Dr. █████.

No audible sound is present on the recorded footage. A subsequent analysis of the videocamera revealed that several internal components of the camera had been fractured.

The following file has been reported to cause disorientation, nausea, sweating, a sense of overwhelming despair, abdominal pains, panic attacks, migraines, and strokes.
- This file should only be listened to in a secure environment.
- Do not drive or operate heavy machinery for up to 24 hours after listening to this file.
- Refrain from making quick eye movements while listening to this file.