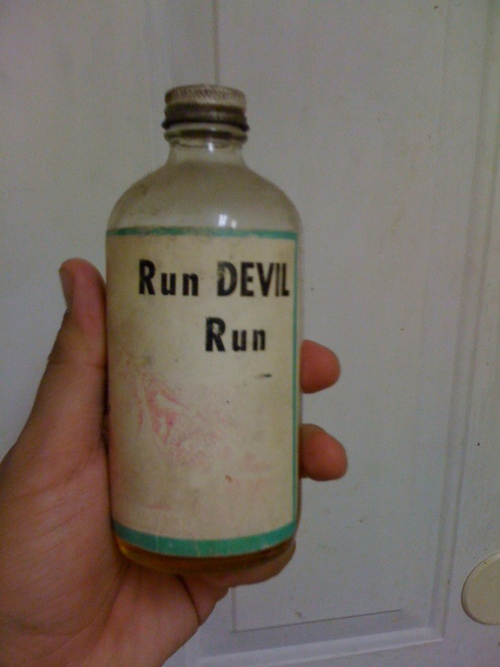 Recovered bottle of SCP-195 held by Agent ████████. The faded red portion of the label depicts a stylized racist caricature of an escaped slave running from several wild-eyed men with guns.

One case containing seventeen (17) bottles of SCP-195 exists in Foundation custody. It is kept in a number three Secure Containment Locker unit in the Safe-class storage section of Site-1279. Access to SCP-195 requires written authorisation from no fewer than two Level Four personnel and accompaniment by a member of site security. Due to the untested possibility of exposure due to the inhalation of evaporated SCP-195, access requires full level-C HAZMAT kit including respirator gear.

SCP-195 is a "medicinal whiskey" sold by a pair of traveling salesmen in the pre-Civil War South. Various historical sources agree that the "whiskey" was targeted primarily to the slavecatchers of that era, and was advertised as having "mind-enhancing" properties. These sources agree that the salesmen were often driven out of town when the side effects of their concoction were discovered, and were "…hanged for their devilsh ways [sic]" on at least two occasions.

When a subject consumes any quantity of SCP-195, they will initially react in a manner consistent with the consumption of an equal quantity of "gutrot" whiskey or moonshine. Within a short span of time (time frame varies by subject), they begin to experience heightened awareness and increased sensory input (taste, touch, smell, et cetera). This effect of the "whiskey" was advertised by its salesmen and was the reason for its target audience. With this heightened sensory capability, however, comes a general decrease in impulse control and heightened fight-or-flight response which has, in testing, been shown to lead to markedly increased levels of violent behavior. This response is theorized to explain the brutality shown by [DATA EXPUNGED].

D-Class under the effect of SCP-195 were capable of and willing to [DATA EXPUNGED]ing to enjoy the violence of the act. D-183578 (first-degree murder, rape; terminated) expressed a desire to "rip the █████'s head off with my teeth" [sic]. Further testing on the capacities of SCP-195 is deemed unnecessary. Late research assistant Renfield has been posthumously awarded a Foundation citation for performance above and beyond the requirements of duty. 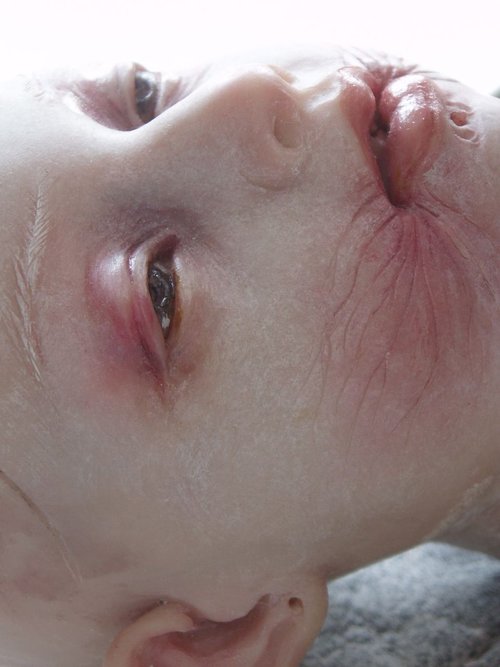 After the "whiskey's" effects wear off, the test subjects will generally return to normal, with the exception of those who [DATA EXPUNGED]. Within a month, however, all subjects will experience a generalized feeling of ennui coupled with fatigue. MRI scans at this stage show development of ulcer-like wounds in the stomach and lungs. These continue to spread indefinitely until the death of the subject. Additionally, the subject's skin and muscle structure begins to degrade, particularly around points of stress or motion. This degradation also continues indefinitely or until the death of the subject.

SCP-195 was discovered by the ██-year-old son of a historian in ██████, Alabama, in late 20██. Mr. ████████'s arrest and sentencing for the murder of [REDACTED] was an item of minor interest in local news in the area. The Foundation became interested in Mr. ████████'s case when he was admitted to a hospital, at which point the unusual degradation of his skin and organs was noted by Foundation informants in the medical community and traced back to an antebellum home where he had assisted his father in cataloging various items of historical interest. A Foundation team was dispatched to the home and located an open case containing ██ bottles of SCP-195.

Addendum: Historical sources' descriptions of the salesmen seem to agree that one man was blond and unusually tall while the other had dark hair and walked with a stoop. Both men had "…strange bright eyes [sic]" and wore matching ████████. [REDACTED] match current Fac[DATA EXPUNGED] remain uncaptured. All personnel are reminded that the capture [DATA EXPUNGED]vel six priority.