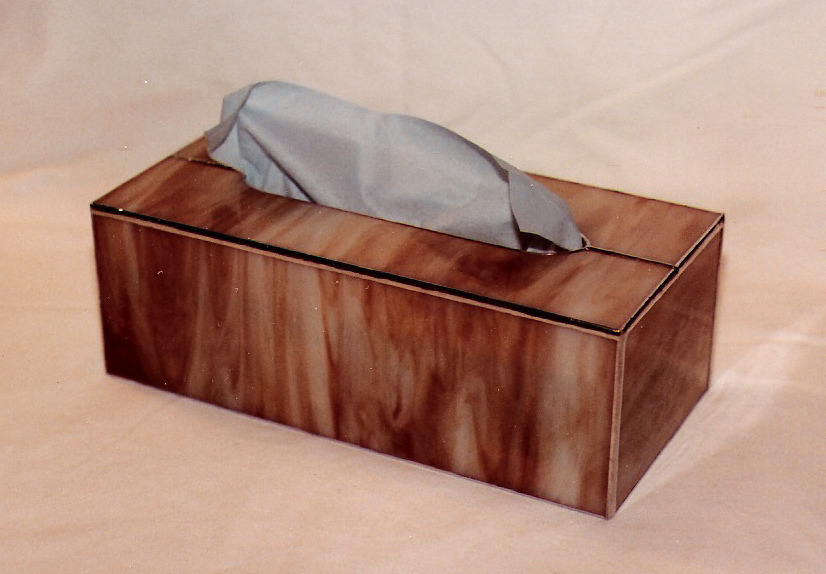 SCP-193-01 is to be contained in Bio Site 42 bio-hazard locker 532-F at all times except during approved experiments. Every 24 hours, all instances of SCP-193-02 are to be removed from SCP-193-01 and incinerated except on feeding days. Once each week, one instance of SCP-193-02 shall be provided with 30 cc of human mucus and left in containment with SCP-193-01. Physical contact with any element of SCP-193 without full level 2 bio-hazard gear is strongly discouraged. Personnel believed to be suffering from exposure to SCP-193-03 shall report to a supervisor for immediate medical examination and assistance.

SCP-193-01 is consistent in external appearance with a box of ███████ brand facial tissue. The bottom folds of the box are abnormally complex, and house a previously unknown soft-bodied invertebrate. The creature's genetics suggest that it is a member of phylum Mollusca, but do not match any more specific known taxonomic classification. The "cardboard" of the box has proven to be a highly specialized shell generated and maintained by the organism, which will gradually repair damage to the box if able. As compared with cardboard the shell is many times less flammable and more durable, but is by no means indestructible.

When SCP-193-02 is brought into contact with the mucous membranes of any mammalian subject, the segment releases 3-5 grams of an as of yet unidentified odorless, colorless gas (SCP-193-03). If inhaled, SCP-193-03 will permeate the sinus tissue and increase mucus production by 500 - 800%. In humans, the increased mucus production unsurprisingly results in the need for additional facial tissue, typically leading to further exposure to SCP-193-02 and -03 and further mucus production. Repeated exposure to SCP-193-03 can, in roughly 70% of cases, lead to permanent dysfunction of a subject's mucus production. The resulting symptoms vary, but include a variety of respiratory issues, prolonged pneumonia, and (in extreme cases) suffocation. In roughly 10% of cases of repeated exposure, the opposite effect is observed: damage to the mucus glands is so severe that the subject is left incapable of mucus production. Such subjects are especially vulnerable to inflammatory respiratory diseases, infection, and damage to the lungs due to inhalation of particulate matter.

No explanation has yet been discovered for the unusual adaptations exhibited in SCP-193; research is ongoing.

Addendum 193-1 As of ██/██/████, Dr. ████████ has confirmed additional properties of SCP-193-02. When exposed to at least 10 cc of mucus and left unattended, instances of SCP-193-02 will attempt to return to SCP-193-01 using a combination of bodily oscillation and gas propulsion (via controlled emission of SCP-193-03). The segments appear to detect possible observers via body heat to determine when they can safely return to SCP-193-01 unobserved. This behavior continues in the presence of thoroughly insulated observers, but not in the presence of large artificial heat sources, supporting the theory that SCP-193-02 detects heat. On reaching SCP-193-01, instances of SCP-193-02 will enter through folds in the bottom of the shell, reintegrating with the main body. These behaviors, combined with the previously cataloged adaptations, are believed to be the hunting and feeding method of SCP-193. More detailed research into the digestion and dietary needs of the organism are ongoing.

The locomotion of SCP-193-02 was discovered following an irregularity in experiment 193-██, in which several of the used "tissues" were left unattended for several minutes. When Dr. ████████ returned, he discovered that these instances of SCP-193-02 had surrounded the locker holding SCP-193-01, but were unable to penetrate containment. Further experimentation lead to the discovery of these previously unknown aspects of the organism. Dr. ████████ has been reprimanded for leaving a known organic SCP unsupervised in a testing chamber.