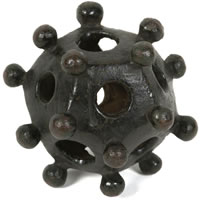 Any structures affected by SCP-184 are to be demolished after review by [DATA EXPUNGED]. Final demolition approval or inclusion into SCP will also be determined by this body. No investigation is to be done into affected structures without approval and a rescue team on standby.

SCP-184 is a small, smooth metallic object, 10 cm (4 in) tall and 10 cm (4 in) wide, in the shape of a dodecahedron. Each face of the figure has a circular hole in the center, and a small sphere is attached to each vertex. SCP-184 is made of an unknown, but highly magnetic, alloy about as hard as brass.

At this point, SCP-184 starts creating wholly new rooms. SCP-184 is apparently able to copy items from inside the structure, creating furnished rooms consistent with the rest of the structure. After a period of time, however, the expansion process appears to break down. For example, items will be made from inappropriate materials (glass books, a wooden microwave), rooms will be oddly-shaped, doors will open into blank walls, and hallways will be tiny or twist back around in long mazes. The new inside structures continue to be more and more odd, while the outside remains unchanged.

This behavior is most dramatically illustrated in homes; however, it has been observed in other instances, including a cardboard box. The changes do not go away with the removal of SCP-184, but no additional structures are created.

I don’t think I need to stress the fact that this thing can NEVER be allowed into Site 19. We may need to look into different containment at some point, but for the time being, we will keep it in the open, immovable, and hidden.

It is currently hypothesized that SCP-184 or an anomaly with a similar effect may be responsible for the creation of Locations of Interest such as Backdoor SoHo, and Chūgoku Cellar. Investigation into SCP-184 as a potential origin for these spaces is ongoing.

SCP-184 was recovered in the Kowloon Walled City in June of ████. Reports of the city's bizarre and explosive growth attracted Operatives, who soon learned of SCP-184, held in the possession of [DATA EXPUNGED]. After several police crackdowns, Mobile Task Force Zeta-9 was dispatched and recovered SCP-184 with minimal losses. The final effect of exposure to SCP-184 on both the City and inhabitants may never fully be understood due to the reckless actions of local law enforcement, which destroyed several affected sections of the city before Operatives could take action to prevent it.

Interviews with residents yielded minimal information, with a communal “wall of silence” being the major response. A few documents indicated that SCP-184 could be brought into a home and allowed to affect the dwelling for 50 pounds sterling per half hour. These documents were unconfirmed by residents.