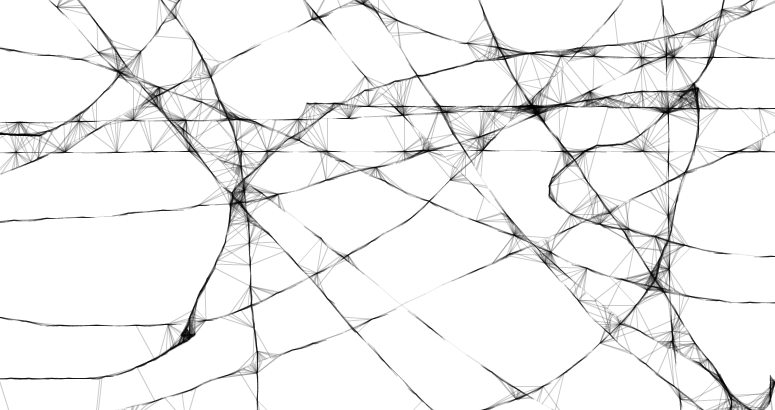 SCP-183's wires, made visible with a high intensity lens.

SCP-183's container must be soundproofed and lined with heavy steel plate. Size of the container is unimportant, as SCP-183 has no apparent preference and will use as much space as it is given. Personnel are strongly advised to avoid entering the container; this is pointless and exceedingly dangerous, and any desire to do so may be indicative of hitherto unobserved psychological capabilities of SCP-183's song (see below). Openings in the container are to be small and brief, preferably exclusive to feeding purposes.

The organism has shown no real desire to escape, but should this occur, it could quickly render the entire research environment impassable, and potentially quite dangerous. SCP-183's song has been described as pleasant, and as long as no subliminal effects are observed, researchers are permitted to keep the chamber's embedded microphones active if they wish.

SCP-183 is an unknown biological entity that is, for all intents and purposes, invisible. Evidence of its existence comes mainly in the form of monofilament wires which the organism apparently synthesizes. These fibers are extremely thin and durable; they are capable of slicing through soft tissue, bone, and even body armor with very little force. Coupled with the difficulty of seeing them, this constitutes a serious hazard to all personnel within the container. Organic material left within the container disappears at a rate of approximately 4 kg per day, an indication that the organism is omnivorous.

The wires synthesized by SCP-183 are unique in human experience. Tests indicate that they may be a form of carbon nanotube. They appear frequently and almost instantly, strung taut between walls, ceiling and floor in no apparent pattern, forming a convoluted, razor-sharp tangle. This may be analogous to a spider's web, a trap to capture food. Small animals in the chamber are left alone until killed by their own movement. If they are non-fatally injured by the wires, SCP-183 will consume any severed body parts but will not attack the animal itself until it is dead. Individual fibers vanish after several hours; our working theory is that they eventually lose their adhesive properties and fall to the floor to be consumed and recycled by SCP-183.

Interestingly, SCP-183 plucks its wires in a distinctly musical pattern, producing a surprisingly complex and euphonic melody which is reproducible on the common pentatonic scale. The limited number of notes suggests that the wires are produced at discrete lengths and tensions, possibly indicative of high intelligence. This may be designed to lure in prey; attempts at playing back the tune or others in the same key have produced no observable changes in activity, suggesting that it is not intended for communication.

Current research on SCP-183 aims to reverse-engineer the organism's monofilament wires and to ascertain the mechanism of its invisibility.