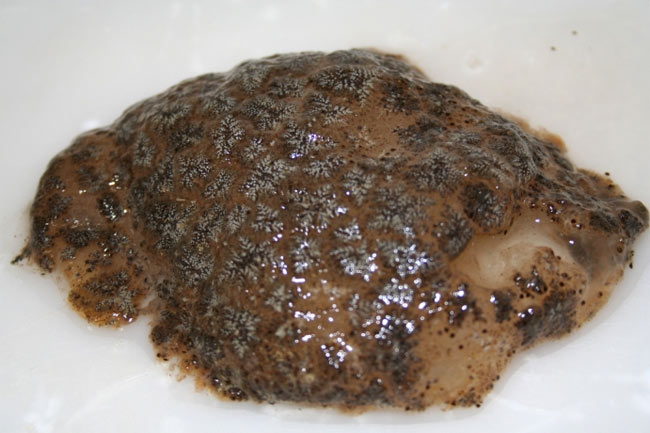 A small SCP-157 colony in its natural form

When not being used in an experiment, SCP-157 is to be stored in its cryptobiotic form, in a dry, airtight container. It is estimated that SCP-157 can survive in this condition for at least 10 years. Specimens needed for experimentation can be removed from storage and given water then food to restore them to a usable state.

Personnel working with an active SCP-157 colony are cautioned not to eat, drink, change clothing, or apply any substance to their body in the presence of SCP-157.

Foundation MTF agents are authorized to administer Class-A amnestics to any survivors or witnesses of wild SCP-157 attacks.

SCP-157 is a previously unknown microscopic animal in the Tardigrade phylum, adapted to live on land as a predator. Like other Tardigrades, SCP-157 is extremely resistant to environmental damage, and can enter a cryptobiotic state when no food is present. SCP-157 normally exists as an amorphous mass composed of millions of individual organisms. In this form, it can slowly crawl and climb.

SCP-157 colonies are predatory, and can attack insects and small animals by engulfing them and then slowly dissolving their prey with digestive enzymes. Humans and other large prey are not normally attacked directly by SCP-157 colonies, as they are too large to engulf, and long-term contact is necessary for SCP-157 to successfully feed. The organism has developed an alternative method of achieving such contact.

SCP-157 colonies possess an innate telepathic ability. When in the presence of prey that is too large to directly attack, the SCP-157 colony will use telepathy to present the illusion of something its prey wants to eat, wear, or apply to its body. SCP-157 is highly toxic when eaten; someone having done so requires antidotes to [REDACTED] and [REDACTED] within 20 minutes, as well as immediate gastric surgery to remove the portion that was eaten. When applied to human/animal skin, SCP-157 will produce an anesthetic to encourage prey to ignore pain and leave the organism in place. It then dissolves and consumes the skin within 30 minutes to two hours. Dead prey is rapidly consumed and SCP-157 will grow significantly as it feeds. When reaching a size of 5 kg, SCP-157 will split into smaller colonies that move off in search of new prey.

When in the presence of two or more individuals, SCP-157 will have an inconsistent appearance – it may appear to be a food item to one person, and an article of clothing to another. This can serve as a warning and prevent exposure to the organism.

Addendum: Note that due to its resilient nature, SCP-157 can be split into smaller pieces, boiled, microwaved, etc. and remain alive and dangerous.

Incident 157-01 █████ ██████, found with extensive scalp damage after mistaking SCP-157 for a bottle of shampoo and applying some to his hair. Victim was apparently immune to SCP-157 anesthetic and began screaming, attracting the attention of his wife, who had been eating a snack. “It was the weirdest thing I’ve ever seen – he had a pastrami sandwich on his head, and it was eating HIM!” Victim treated for chemical burns; SCP-157 captured alive; victim and wife given Class A amnestics and released.

Incident 157-02 ███████ █████, found partially consumed by SCP-157 in his office at ██████ Co., after apparently believing SCP-157 was a pair of socks and wearing them. Victim bled to death after feet and lower legs were mostly dissolved.

Incident 157-03 Standard monitoring of police reports revealed a missing persons case where the investigating officers observed a couch slowly attempting to crawl towards the door of the victim's apartment. Couch initially sealed in area by police; Foundation agents later determined it to be an unusually large variant of SCP-157 and contained the specimen. Amnestics administered. Although large enough to attack humans directly, this specimen prefers to use its telepathic ability to attract prey, in the manner of smaller SCP-157 colonies.