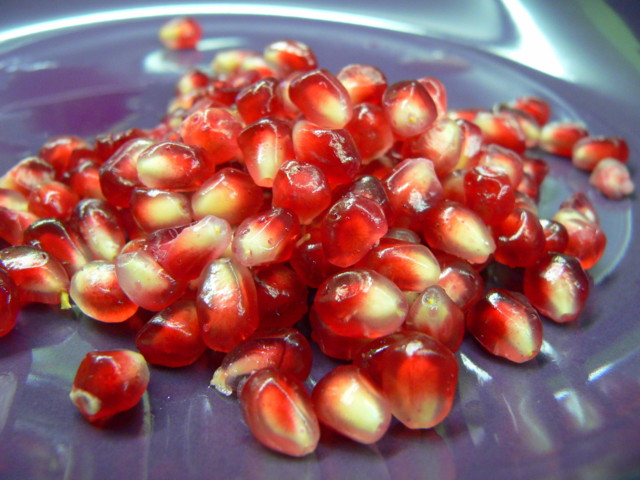 SCP-156 is to be kept in refrigerated Storage Unit 19c except when removed for experimentation. Subjects infected by SCP-156 are to be restrained and monitored for their own safety. From September 21st-March 21st, infected subjects should be kept within a secure storage unit unless the experiment’s parameters indicate otherwise. Both storage facilities should be monitored by security camera. The termination and autopsy of D-Class Personnel assigned to SCP-156 should be delayed until after March 21st. No personnel are permitted to consume SCP-156 except D-class personnel unless approved by a level 3 staff member.

SCP-156 is a group of exactly 181 pomegranate arils. The number of instances of SCP-156 is constant. When one is ingested or destroyed, it is replaced instantaneously with a new one among the largest group of contiguous instances. Otherwise, the instances can be moved around freely. After leaving the group (i.e. after an instance is touching no other instance), the instance will spoil normally, after which a new instance will appear. When all instances are destroyed simultaneously, all 181 instances reappear randomly at the location of one of the destroyed arils. Attempts to measure the time between destruction of one instance and the appearance of a new one using high-speed cameras have so far failed.

If SCP-156 is ingested between March 21st and September 20th, subjects display no signs of infection until noon of September 21st, when all vital processes abruptly cease. A similar effect is observed immediately when SCP-156 is ingested after September 21st. Despite being technically dead, postmortem examinations of subjects have been unable to discover a cause of death. Subjects appear to have been in perfect health, aside from any pre-existing conditions. While "dead", subjects do not show any signs of decomposition though the bodies of many subjects begin displaying bruising and scarring consistent with torture. While the majority of subjects suffer these wounds, not all do, and no reliable formula has been discovered to predict which subjects will be affected. Infected subjects remain in this dormant state until noon of March 21st, when life processes restart. Subjects remember little of the intervening time period. While most subjects are entirely unaware that any time has passed since their apparent death, some claim to recall a pale white male face and a wilting pomegranate tree.

Subjects continue to die and reanimate annually on September and March 21st, respectively, until killed by another cause. Reanimation only occurs from deaths caused by ingesting SCP-156.

After undergoing a single death-reanimation cycle, subjects began displaying high levels of distress and paranoia as time approaches September 21st, even if they have not been made aware of the death-reanimation cycle. Furthermore, subjects will take extreme lengths to avoid taking any sort of risk or danger to their person, even if they had displayed risk-taking behaviors prior to ingesting SCP-156. Over the course of multiple death/reanimation cycles, these psychological symptoms become more pronounced. At the same time, physical symptoms during the dormant period increase in intensity for the subjects suffering from them. Eventually, physical wounds on subjects will begin to emulate burns and puncture wounds. Many subjects gain a phobia of dogs and dead plants after 3-5 reanimations. After several deaths caused by SCP-156, the ocular tissue undergoes necrosis in many subjects. This tissue does not reanimate with the rest of the body. Often, after ten or more reanimations, reanimation of bodily processes will occur but the subject will fail to regain consciousness, entering a comatose state. Death and reanimation continues annually even after subjects have reached this stage.

SCP-156 came to the attention of the Foundation after an incident in ████████, Greece, after ██ people died on September 21st, 19██,without apparent cause. The Foundation became involved after locals reported the return of several of the dead who had been interred in above ground vaults the following spring. After questioning these subjects, all reported having attended a party at the house of one A█████ K█████, who had been buried and was found, asphyxiated in her coffin. SCP-156 was discovered within the house, fresh despite the intervening six months since the incident. Testing commenced on D-Class personnel on August ██, 19██. D-E15624, the first test subject, died on September 2█, 19██, and was autopsied. No cause of death could be found. Subject was left under monitoring in storage. On March 2█, 19██, subject began to show brain activity and subject's heart began beating despite the body having taken significant damage during the autopsy. D-E15624 expired shortly thereafter without regaining consciousness. Arils given SCP status and longer term testing was ordered.