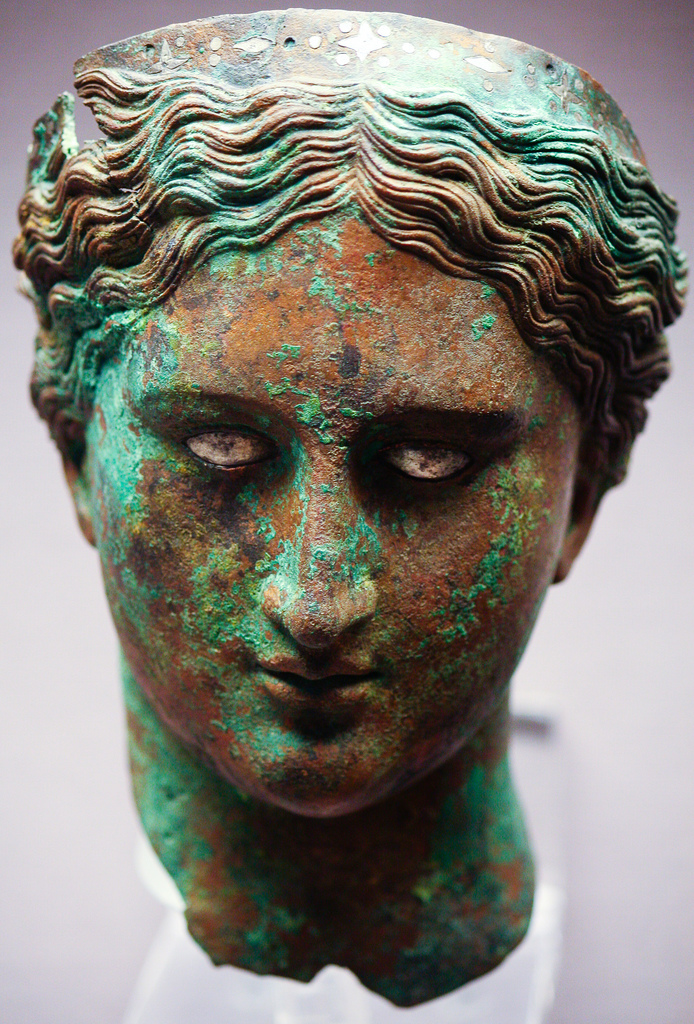 Note: Photos of SCP-146 have been deemed safe.

Containment procedures have been revised after it was noted that the effects of SCP-146 were sharply and dangerously increased under previous containment (a standard one-half (0.5) meter cubed secure-storage bin). The bin should remain free, however, should a researcher wish to test SCP-146 at high intensity. Level 3 clearance is required for any personnel wishing to enclose or cover SCP-146 for a period exceeding two days.

During normal storage, SCP-146 is to be kept on a marble pedestal in its storage room, located [DATA EXPUNGED]. SCP-146's standard storage room measures no less than twenty (20) square meters, with stuccoed walls and a ceiling painted to resemble a clear daytime sky. The room is to be kept well-lit (full daylight equivalent) at all times, furnished with an assortment of potted plants (which must be tended to daily), and decorated in the style of the Late Republican period of Rome (c. 120-80 BCE). Experimentation with different interior styles has shown that SCP-146 seems to prefer this arrangement and to have aesthetic preferences consistent with the aristocracy of Rome from that era. While this containment is standard, researchers with clearance Level 2 or higher may experiment with different containment settings in order to modify the effects of SCP-146.

While SCP-146 is non-motile and therefore requires little security itself, personnel entering its containment area or handling it in any way must not make eye contact with SCP-146. Any attempts to cover SCP-146 in order to prevent eye-contact is prohibited, as this has been shown to increase SCP-146's effect at an unpredictable rate. In general, one (1) day of covering or confinement will cause SCP-146 to skip over the beginning phase of its effect and begin with the most traumatic memories. After three (3) days, SCP-146 has been shown to produce its effect without having to make direct eye-contact first. After seven (7) days, the effect of SCP-146 is both far more intense and no longer confined to subjects within SCP-146's field of vision. Researchers in an adjacent room were affected and one was permanently [DATA REDACTED]. Permission to experiment beyond seven (7) days is denied by order of O5-█. Blinders and decorative screens are available for personnel who must enter SCP-146's containment area for maintenance.

SCP-146 is a hollow bronze head, apparently a fragment of a complete statue or bust, depicting a crowned young woman or perhaps an effeminate young man. The head exhibits severe verdigris over much of its surface. The crown of SCP-146 is inlaid with silver decorations, and its eyes (the apparent source of SCP-146's effects) are beaten silver, shined to be mildly reflective. To date, SCP-146 has not exhibited any signs of movement, but its reaction to certain decor in its containment area indicates that it may possess a degree of sentience, if not outright sapience. If SCP-146 is able to communicate, it has not yet done so.

SCP-146 exhibits the ability to access and bring to mind certain memories in those who initiate eye contact. These memories are usually tied to a sense of guilt or shame in the subject. After initial eye contact is made, the subject need only remain somewhere in SCP-146's field of vision for the memories and associated feelings to become more intense, although continual eye contact speeds the process.

Upon initial eye contact with SCP-146, recent memories will begin to surface in the subject. For example, subjects who have ignored a friend in the hall or exceeded the speed limit will be reminded of these events and begin to feel mildly guilty, whether or not they would normally care about the event. With continued exposure to the gaze of SCP-146, the subject will begin to recall older and more vivid memories, with a corresponding increase in feelings of shame in the subject. Generally, after thirty (30) minutes of exposure, the memories will move from being vivid recollections to intense hallucinations, with the subject unable to distinguish the past from the present, or the imagined from the real. Subjects have been observed to regress in personality as well, particularly in cases where memories of childhood trauma have been brought up. Any test subjects exposed for over thirty (30) minutes should be restrained both for their own safety and the safety of others. All subjects to date who have been exposed to SCP-146 for sixty (60) minutes have completely retreated into their hallucinations; so far no such subject has been restored to consciousness from this near-catatonic state. Such subjects must be fed intravenously and are unresponsive to external stimuli, save for occasional murmurings consistent with their regression.

It has also been noted that when subjects recall a shameful event, they will often feel compelled to make amends for their actions. This is not generally a problem in the case of minor offenses and has in some cases led to greater unity among the staff. However, problems arise when the subject cannot make amends, either because the offended party cannot be contacted or because the transgression is somehow irredeemable. Sometimes, the subject will put forth renewed positive efforts in order to "balance out" their guilt. However, in most such cases, subjects fall into a deep depression and/or turn to some form of self-punishment, including self-mutilation and suicide. Please see the attached experiment logs for detailed cases.

SCP-146 was acquired from a Mr. ████ ███████ of Birmingham, UK. Mr. ███████ had acquired SCP-146 during the estate sale of a renowned philanthropist, the late ████████ ██████████, Lord of █████████████. It was purchased in a lot with a number of other artifacts for £█████. When Mr. ███████ began to experience SCP-146's effects, he began seeing a psychiatrist, Undercover Agent UA33-56G. Mr. ███████ was put into an institution and SCP-146 was taken into Foundation custody. UA33-56G's notes on Mr. ███████'s mental state are available for study by researchers of Level 2 or higher, filed as Document SCP-146-A.

In order to calibrate a baseline for SCP-146's effects, a standard four (4) by four (4) meter interrogation room was divided in half by an opaque curtain. SCP-146 was placed on a table inside a protective plexiglass case in one half of the room. On the other side of the curtain, Subject D-044323 was restrained such that he was looking directly at SCP-146's position. Researchers maintained constant communication with the subject via intercom throughout the testing process.

The curtain was dropped, causing the subject to look squarely into the eyes of SCP-146. The subject voiced immediate discomfort and closed his eyes, with an increase in heartrate of 15 BPM. With prompting, the subject related the memories he was recalling, beginning with minor breaches of behavior protocol. The subject then recalled several altercations with other prisoners before his being taken by the Foundation, including a particularly graphic description of [DATA REDACTED]. Researchers noted that as time went on, the subject became more cooperative and his speech patterns changed, resembling someone undergoing therapeutic hypnosis.

After fifteen (15) minutes, the subject's speech had become slurred and his EEG patterns showed similarities to someone experiencing vivid dreams. The subject entered into one half of a dialogue which culminated in his trying to break his restraints. After several minutes, the subject ceased thrashing and began to cry. The subject started begging, apparently to someone in his hallucination: "Stop. Take it back. Don't. I won't do it again. I'm sorry. I don't want to. Not again. Stop… Please…" This behavior continued until, after fifty-four (54) minutes of exposure to SCP-146, the subject's vocalizations halted and his EEG showed signs consistent with coma. After an additional hour, no further effects were observed, and the subject was removed and euthanized. Post-mortem examination of his brain noted abnormal levels of █████████ and █████-███████, which neuropathologist Dr. █████████ described as indicative of [DATA REDACTED].

(NOTE: At this point, SCP-146 was being kept along with the other artifacts purchased at auction, because it was not yet known that the effect was confined to SCP-146 alone. I theorize that this containment approximated "favorable" containment and therefore kept SCP-146's effect at its base strength. -Professor Skali █████████)

Experiment Log #146-04
The first experiment conducted after it was determined that SCP-146 consisted only of the bronze head took place after SCP-146 had been moved to a standard one-half (0.5) meter cubed storage bin where it had remained for two (2) days. Subject D-044784 and SCP-146 were placed on opposite sides of a curtain in a standard interrogation room, as in previous experiments. The subject was restrained as in previous experiments. When the curtain was dropped, the subject reported an immediate headache and began to cry. The subject's heartrate jumped to 180 BPM but then dropped rapidly to 40 BPM, and the subject lost consciousness. Medical personnel entered the room and began examining the subject, at which time the subject regained consciousness, her heartrate spiking to 175 BPM. The subject struggled violently against her restraints, and was soon able to break the restraint on her right arm, severely damaging her own arm and hand in the process. Paramedic D. █████████ was injured as the subject struck him in order to gain access to his first-aid kit. The subject was able to grab a small scalpel and jam it into her own neck before guards could regain control. Medical staff administered first aid, but the subject died during emergency surgery due to blood loss.

(NOTE: After several similar incidents it was determined that SCP-146's ability was affected by its containment. Anyone wishing to do further research must take this into account as even brief accidental exposure could prove harmful. -Professor Skali █████████)