Possible Skull of the White Div 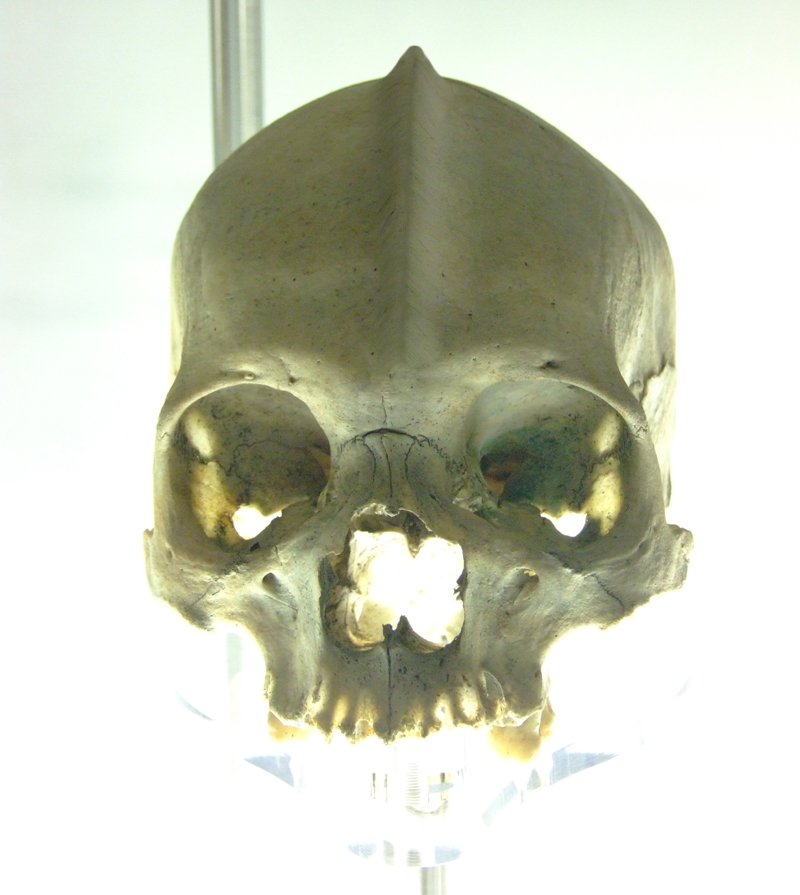 SCP-139 is to be kept in a room at least six meters at its smallest dimension, suspended at least two meters from the nearest inside surface of the room. No one is to enter this room under any circumstance. The room is never to be left without at least two armed guards at any moment.

The object appears on the surface to be the poorly preserved skull of a hominid. It is missing the lower jaw bone. Also of note is the extreme wear, especially to the eye sockets.

Photography of the skull has been analyzed by leading anthropologists. All agree that the specimen is too badly damaged to be identified with complete accuracy, and that it is most definitely hominid. While some believe it is a standard Neanderthal skull, others are convinced that the wide cavities are the result of wear and that the original size was much smaller, more like that of a modern human. This is because the size of the nasal and ocular cavities was the main feature leading some to identify the skull as Neanderthal. However, all were confounded by the ridge at the top of the skull. This feature is most commonly associated with prehistoric herbivorous species of hominids.

One of our own anthropologists has proposed the theory that the ridge is the sign of a powerfully jawed animal. Such ridges generally act as anchors for jaw muscles, such as in Paranthropus boisei. These animals used their heavy jaw muscles for chewing plants, but it is also feasible that with sharp teeth they could easily be used for killing.

The following was translated by Dr. ████ █ █████ from ORIA Document D.TDL67.

When discovered, the skull was located in a small town just south of the Throne of Jamshid. [Takht-e Jamshid, or "Throne of Jamshid" has been determined to be a modern Farsi name for Persepolis]

The skull was first recorded by Douglas Winthrop, an Englishman and employee of Anglo-Iranian Oil during the 1370s. [Roughly the 1950s on the Gregorian Calendar] Winthrop was an amateur anthropologist seeking fame and glory, and came upon the town hoping to find a living missing link. He believed that the residents of the town may be living Neanderthals. Though this hypothesis was quickly abandoned upon inspection of the townspeople, he did uncover the skull.

When discovered, the skull was being held in an iron and copper cage, suspended fifty feet [15.24 meters] in the air from a cliff using hemp rope. The rope was tied to a hook drilled into the side of the cliff, implying an intention never to bring it back down. A pulley was present, however. It was attached to a wall erected on the edge of the cliff. The pulley was used to lower food and water down towards the skull.

The people referred to the skull as the skull of the White Div. In ancient lore, the White Div is a demon and the spawn of Ahriman, who is the sum of all evil. The White Div in legend is a being of great and mystic power, defeated by Rostam. [Rostam is a legendary hero of Persia] Purportedly the Div was slain in the northern hills of what is now Azerbaijan.

According to the townspeople, the skull had been brought to their town by a madman who had slain many men before they discovered the power of the skull and it was contained and put in its current position.

Winthrop was soon overcome with madness himself, slaughtering seven of his friends after his return to England. He also was charged and convicted of sodomizing several male and female animals (among them several chickens, a male and female dog, and three bulls).

He did not, however, manage to bring the skull back as it was confiscated by the University of Shiraz under the Shah's authority.

After the confiscation, however, no new research became of it.

The artifact surfaced next in the Yukon, ninety kilometers from the Alaskan border. The entire community of Caribou Crossing (what is known today as Carcross, Yukon) was found brutally murdered by multiple stab wounds. Semen was found inside the wounds and it is assumed the assailant ejaculated into the incisions. The corpses were found stacked in a large pile in the center of the chapel. On top of the pile of corpses was the skull.

The artifact has since been in our custody.

No research is planned.