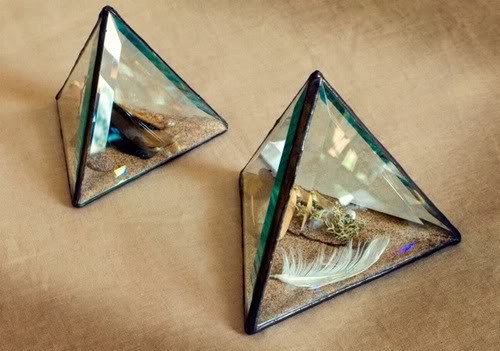 SCP-132 takes the form of a series of ███ glass tetrahedrons, each with a side length of 10.3 centimeters. Each instance of SCP-132 appears to contain a patch of desert sand. Occasionally scorpions and other desert creatures enter the confines of an instance of SCP-132 as if it were a continuous piece of desert. Creatures within SCP-132 have shown no awareness of the existence of anything outside of the object and attempts to influence the area within SCP-132 have failed.

Review of observed animal life within SCP-132 has proven inconsistent. Clusters of contiguous instances have been internally consistent and have been confirmed to display areas of every major desert. No method of pinpointing exact locations has been discovered; staff observing SCP-132 are advised to be on the lookout for any defining features that could aid in this endeavor.

Procedure: SCP-132-01 shaken vigorously
Result: A few grains of sand in SCP-132-01 shift as though picked up by a light wind.

Procedure: SCP-132-01 shaken vigorously
Result: No apparent change in SCP-132-01
Note: I guess it was just the wind, better to be sure anyway. -Dr. Peterson

Procedure: A corner of SCP-132-01 is filed for several strokes
Result: The filed corner is scuffed in a consistent manner to normal glass

Procedure: Heat is applied to the side of SCP-132-01 with a blowtorch
Result: Heated side melts and a sizable hole is cut in SCP-132-01. Desert scene remains.
Note: I prodded around in there after it cooled and only felt glass; it would appear that SCP-132 only shows an illusionary desert. I suppose it could be showing a real place but I have no idea how we could confirm this or locate where that may be. -Dr. Peterson

Incident Log 132-01: Dr. R███████, currently stationed at Area-██, reports knocking SCP-132-71 off her desk. Upon impact with the ground, SCP-132-71 shattered and the office of Dr. R███████ was buffeted by extreme winds. Other owners of instances of SCP-132 confirm that the area shown by SCP-132-71 and adjoining instances was experiencing a sandstorm.

Addendum 132-01 Careful observation of SCP-132 has found that many instances are contiguous, the largest 'section' composed of sixteen (16) different instances. Speculation over the existence of additional unsecured instances has been raised.

Addendum 132-02 Administration has deemed the possible risk of unsecured instances of SCP-132 existing to be negligible and set retrieval efforts to lowest priority. Keywords relating to SCP-132 have been added to routine search protocols.

Addendum 132-03 A large box arrived for Dr. Richardson at his home with a return address of [REDACTED], a Foundation front. No faculty associated with [REDACTED] report any association with said box and it does not appear on any [REDACTED] records. Inside were thirty-seven (37) uncatalogued instances of SCP-132. Twelve (12) were contiguous with previously documented instances of SCP-132 and three (3) instances which had no known shared edges were brought into contiguity. Of particular note were eighteen (18) instances which appear to display Martian soil, thirteen (13) of which were found to be contiguous.

Addendum 132-04 At Dr. L████████'s suggestion, notes were taken over a year on the light cycle of SCP-132 clusters. Although imprecise, the Foundation now has a rough set of coordinates for various SCP-132 viewing locations. No missions need be sent to confirm these locations but teams passing near are encouraged to assist Dr. Peterson in pinpointing coordinates.