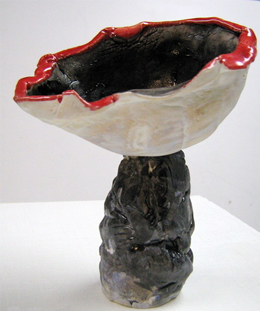 SCP-107 in an inactive state

SCP-107 poses no immediate threat, so long as it does not come into contact with any liquid. As such, it is stored at Site-19 in a five (5) metre square containment cell, on a one (1) metre high pedestal, inside a clear perspex container. Experimentation with SCP-107 is to be carried out at Research Area-06, a 484 km2 (22 x 22 km) area of desolate land in █████████ dedicated to this purpose. Anyone who attempts to activate SCP-107 outside of an approved experiment must be eliminated with any force necessary.

Access to and removal of the object requires the authorization of two (2) Level 4 personnel, and the approval by said personnel of a full experimental procedure. Should SCP-107 become active while within Site-19, two Class-D personnel are to remove it from the site via one of the item transport trucks in Loading Bay-02. This procedure must be followed regardless of the substance that activated SCP-107, given the unpredictable nature of the item's effect on plant matter. SCP-107 should only be returned once precipitation has ceased completely and any abnormal plant growth has been neutralized or contained for further study.

SCP-107 resembles the top section of a hollow turtle shell. The shell is composed of a hardened biological material of unknown origin. Despite its appearance, whether this material is derived from the shell of a standard sea turtle (superfamily Chelonioidea) is, as yet, unknown. The item is completely inert until the inside of the turtle shell comes into contact with a liquid; when it does so, said liquid appears to be absorbed very quickly. Where the liquid drains to is unknown, given the lack of visible pores on the inside of the shell. Once active, the red edge of the shell glows dimly, and the substance placed into the shell begins to precipitate in the atmosphere and fall as 'rain' in the area at least 0.5 m, but less than 10 km, from the object. This phenomenon is mobile: moving SCP-107 will move the area of effect, along with the 'exclusion zone'.

The duration and intensity appears proportional to the amount of liquid placed in the shell. 10 ml of water resulted in just under half an hour of light drizzle, whereas filling to around the three-quarter mark set off two days of torrential rain. Precipitation generated by SCP-107 has varying effects on plant matter, although these effects are only seen in plants grown within the effect zone – watering other plants with collected liquid causes no abnormal reaction (see experimental log, Addendum 107-2).

Addendum 107-1 SCP-107 was discovered by an archaeologist, Prof. M███████ ████████████, in what is now Ethiopia, buried alongside what appeared to be a tribal shaman. Carbon dating performed on the shaman's bones gave an age of around 18000 BCE. SCP-107 proved resistant to all attempts to obtain a sample, and therefore no concrete origin date can be determined. The Foundation became involved after intercepting reports of strange weather events at the dig, accompanied by unusual plant growth.

Addendum 107-2 Below is a log of all tests carried out with SCP-107. Agents with ideas for sensible future testing protocols should contact me. Feel free to test reasonably safe liquids with SCP-107, and log your findings here (please note that you will be responsible for anything that results from the test). We need all the data we can get on this oddity. More tests with liquid-based SCPs may have research value, but most are simply too dangerous to carry out, at least with current containment procedures. Tests involving SCP-107 and SCP-009, SCP-447-2, and SCP-874 have been proposed, but were rejected on the grounds that the results have the potential to be dangerous and/or highly unstable. — Dr. Quentin I███████

Input: 10 ml standard tap water
Result: Light rain fell over the test site for 27 minutes. Tests on the water showed that it had no unusual properties. For at least two weeks after the test, grass at the test site was seen to grow at a much increased rate, and the resulting plants were a richer green in colour than those unaffected by the rain.
Further procedure: A sample of the rain was collected, and used to water various other plants outside of the test site.
Result: No effect was observed.

Input: 55 ml standard tap water
Result: Torrential rainfall over test site for two days, and an effect on the grass similar to that of the first test. Fruit-bearing plants grown in the soil at the test site grew very quickly, and bore much larger fruit than control plants. Effect had diminished considerably after three months.

Input: 10 ml human blood, extracted from a Class-D test subject
Result: A substance proven afterwards to be human blood with the same genetic makeup as the donating subject fell on the test site for 27 minutes. Grass at the test site appeared to die on contact with the blood, and began rotting within minutes. Any non-grass plants planted in the resulting soil began to mutate and grow large (>20 cm across) carnivorous organs similar to those of the 'Venus Flytrap' (Dionaea muscipula). When approached by Class-D personnel, the plants were seen to [DATA EXPUNGED]. These organisms began to grow back after two weeks. Further testing with bodily fluids considered unwise.

Input: 10 ml water with 5 g steel ball bearings
Result: Water was absorbed by SCP-107 and the standard reaction was observed in plant matter. Ball bearings remained in the shell, evidently having no impact on the test.

Input: 10 ml liquid cyanoacrylate adhesive
Result: All liquid was absorbed by SCP-107, and partially-cured cyanoacrylate fell on the test site for 18 minutes. It is likely that the reduced duration of effect was due to curing of the adhesive whilst 'inside' SCP-107. Plant matter grew sticky coating later identified as a cyanoacrylate derivative. Coating was very effective at trapping insects and preventing them from damaging plants.

Input: 10 ml fresh orange juice
Result: Standard precipitation pattern (27 minutes of drizzle). Fruit bearing plants moved to the testing site began to grow an unknown citrus fruit, irrespective of plant species and despite the cold conditions. No ill effects observed from consumption of the fruit; samples have been taken for further testing.

Input: 2 ml human saliva provided by a Class-D test subject
Result: Substance later proven to be human saliva fell on the test site for 8 minutes. Non-grass plants moved to the test site grew small (2-5cm) spherical sacs along stems or thin branches. When the plant was approached by the test subject, the sacs violently expelled a saliva-like liquid toward the subject. Subject reported no illness or injury. Augmented plants began to die within 3 days.

Input: 5 ml elemental mercury
Result: Sample began to be absorbed, but was then re-exuded.