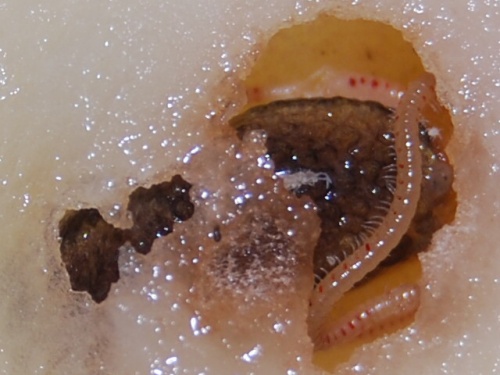 SCP-103 does not require any specific or strict containment procedures. If SCP-103 begins to show any signs of distress or erratic behavior, SCP-103 is to be moved to a 5m x 5m room while awaiting medical examination.

SCP-103 is to be maintained in a medically induced vegetative state to ensure compliance. It is to be kept alive with regular [DATA EXPUNGED] certain that the incisions are not allowed to heal, keeping SCP-103's stomach cavity exposed at all times. Class Four Foundation Restricted Medical Kit is to be employed by all personnel interacting with SCP-103.

All [REDACTED] from SCP-103 are to be incinerated. At no time should any personnel come into unprotected contact with any object or substance removed from SCP-103.

SCP-103 appears to be an average human male in his mid-forties. Subject has been measured at 190 cm in height, and weighing in at 100 kg. Subject was born in 19██ on ████ ██th. The Subject has no known living relatives at this time.

Subject checked into a small, local hospital in Mid-April at approximately 9:30PM. The subject explained to the doctor on staff that he had not eaten for weeks, due to not feeling any effects of hunger. After an initial examination, SCP-103 appeared to be perfectly healthy despite his condition. SCP-103 continued to explain to the staff that he didn't feel any need to eat.

Upon obtaining and studying SCP-103, it appears that any solid or liquid coming in contact with the inside of SCP-103's stomach disappears instantaneously. Despite this condition, SCP-103 appears to be perfectly healthy. At this point it is unknown how SCP-103 obtains the nutrients that a human would need to survive or where the provided food ends up after consumption. SCP-103 does not expel any waste. SCP-103 has reported becoming thirsty [as a 'normal' human would], due to this, a standard cooler with 12 bottles of fresh spring water are to be delivered to SCP-103's room at 6:30AM every morning. SCP-103 has shown no signs of hostility towards our staff, occasionally engaging in conversation and board games provided by the staff.

Addendum 103-a All testing to date has been inconclusive. It is unlikely that further testing will teach us anything new. Research terminated. Subject released, but to remain under observation and report for mandatory medical examination on a monthly basis. SCP-103 has been provided with a means of contacting Foundation personnel in the event of a change in condition. Research logs are to remain on file.

Addendum 103-b On █/██/████, SCP-103 reported to a Foundation medical facility. SCP-103 was observed at this time to be vomiting copious amounts of blood, in excess of ██ liters. This blood did not match SCP-103's blood type, nor did it [DATA EXPUNGED]. A stomach pump procedure was attempted, but failed due to the volume of blood being produced. Within █ hours, blood flow ceased. Shortly thereafter, Foundation medical personnel initiated an exploratory surgical procedure.

Upon opening SCP-103's stomach cavity, Doctor Yun noted "several protrusions along the outer lining of the stomach, in an approximation of a human face". When Doctor Yun attempted a biopsy, the protrusions "…suddenly retreated, implying that they were the imprint of a foreign body inside the stomach."

(Doctor Yun was instructed to continue the exploratory procedure, and performed admirably. His reluctance was noted on record, and will be submitted as evidence in the hearings of Supervisor ███████'s court martial procedure.)

SCP-103 has been reclassified Euclid and recontained with updated containment protocols.