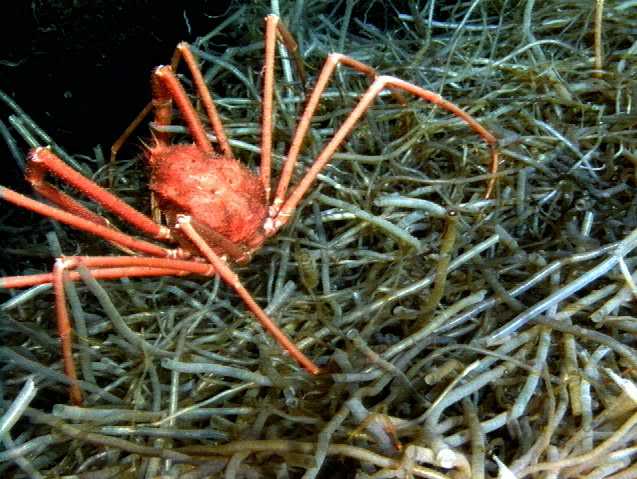 Members of SCP-098 are to be kept in a 10 m x 20 m room with small pools of water and a sandy substrate. Rocks and driftwood are to be left in a random arrangement for SCP-098 to nest in.

SCP-098 is a species of previously unknown crustacean. They resemble crabs, but rather than chelae, the front limbs terminate in knife-like structures that incorporate silica to form an extremely sharp edge. Specimens reach larger size than normal for land-dwelling arthropods, at 40 centimeters tall and as large as 60 centimeters across.

Specimens of SCP-098 prefer an environment with ready concealment and shallow pools of water. They are able to breathe both water and air, splitting their time between the two environments. They also are capable of vocalizations, using a larynx-like structure attached to primitive lungs.

SCP-098 demonstrates pack-hunting behavior when attacking prey. When specimens detect a prey animal, they will attempt to surround it. They will mimic the sounds made by the creature, apparently to confuse it or to draw it into position. When ready, one specimen will approach the prey animal. When its attention is fixed on the first specimen, others will move behind the prey and attempt to cut the tendons of the legs or other limbs. They will continue to mimic the sounds the prey animal makes to disorient it. After making a cut, a specimen of SCP-098 will spit a viscous mucus over the wound. This substance hardens rapidly, preventing blood loss or infection. This continues until the prey animal is completely immobilized.

At this point, specimens will begin to feed on the prey animal by cutting off small pieces of flesh. This begins with soft, readily accessible tissues, such as those of the face and extremities, before moving to other parts of the body. Specimens of SCP-098 will only feed so long as the prey animal is capable of respiration. Feeding can last several hours or several days, depending on the size of the prey animal and the number of specimens present.

Specimens of SCP-098 show some ability to communicate, alerting each other to the presence of threats or potential food over short distances. It was initially thought that SCP-098 might display human-level intelligence, but are now believed to merely parrot human speech.

SCP-098 normally poses little threat to adult humans, preferring smaller prey, such as dogs, cats, and small pigs. However, they have attacked larger prey when a sufficient number of specimens were present, or else other food was unavailable.

SCP-098 was discovered in ██████, Brazil, after a rash of child disappearances.

Addendum 098-1 SCP-098 is more intelligent than previously thought. They adapt quickly to changes in their environment, and have shown an ability to remember patterns (such as feeding and cleaning times, and habitual movement of personnel entering their enclosure). Cleaning personnel must ensure that they regularly vary their routes through the enclosure to prevent incidents. Dr. Mann has taught several of them simple tricks, and they seem to understand the meanings of several commands. Testing will continue.