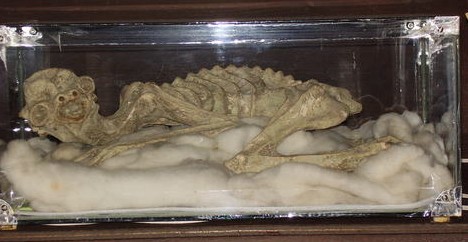 SCP-088 in its original case. Note that the glass and metal enclosure have been replaced.

SCP-088 is to remain sealed in its airtight case at all times. The case is constructed of transparent acrylic plastic to resist the corrosive properties of SCP-088's secretions. In the event that SCP-088 should awaken from hibernation, any room that it is stored within should be constructed of durable plastics, rubber or ceramics to hinder its ability to escape. Temperature of SCP-088's containment should not exceed 15 degrees Celsius, and any personnel entering containment must observe level 4 hazardous material protocols and wear the appropriate protective gear at all times.

Any personnel who do not observe proper containment protocols in presence of SCP-088 or who show signs of physical mutation are to be demoted to D-class and held for observation.

SCP-088 is a humanoid with reptilian features which appears to have been mummified in a languid posture. However, SCP-088 is merely in a state of hibernation from which it may recover if it is again exposed to a more hospitable environment than its current containment. Research has indicated that SCP-088 is approximately 6000 years old and is capable of secreting a variety of hazardous biological compounds from its mouth and hands. Some of these substances could be of great strategic value if replicated, but until a means to extract them without awakening SCP-088 is found, research into this area is on hold.

SCP-088 was recovered with the mummified remains of 23 beings sharing a similar morphology. However, none of these beings were alive and examination suggests that they were originally human. Information obtained by Agents E088-3 and E088-7 and their subsequent mutation due to SCP-088 exposure corroborates this theory. 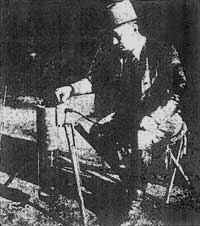 Addendum: SCP-088 was recovered in 193█ from a subterranean complex below Los Angeles, California. The site was originally discovered by G. W█████ S██████ using a device he called a "radio X-ray," which was little more than a mechanical dowsing rod. While S██████'s methods were dubious, his discovery was not. After mapping a series of tunnels and gold deposits below the city, S██████ declared that he had found the lost city of the Lizard People as described in the legends of Arizona's Hopi tribe. S██████'s claims went as far as to be featured on the front page of the Los Angeles Times on January 29th, 1934, before the Foundation was able to verify his claims and silence Mr. S██████.

The subterranean complex was not nearly as extensive as described in legend, and most of the artifacts recovered within were too corroded to provide significant information, save for a long message carved into the rock wall of an unfinished tunnel. For partial translation of this text, see Document 088-14.

Containment breach overview: In more than 70 years of containment, SCP-088 has only roused from its state of hibernation twice, breaching containment with a caustic fluid that dissolves most minerals and metals. Each time multiple personnel were exposed to a second compound which SCP-088 uses to propagate itself: affected personnel underwent a painful mutation after which they shared the physical characteristics of SCP-088. Those few who received a large dosage of the compound, administered directly via mouth-to-mouth contact, were changed the fastest and subsequently sacrificed themselves to protect SCP-088 from harm. SCP-088 has also demonstrated the ability to produce potent neurotoxins in liquid and gaseous form to combat containment personnel.

Containment during the second breach was reachieved by isolating SCP-088 and affected personnel in the facility and lowering the temperature. Affected personnel built a pedestal from discarded equipment, upon which SCP-088 took a recumbent position before slipping back into hibernation. The mutated personnel were neutralized at this point and SCP-088 was returned to containment.

The current strategy of lowered temperature and non-metallic containment has been successful in keeping SCP-088 isolated. SCP-088 was reclassified to Safe status on November ██, 19██.