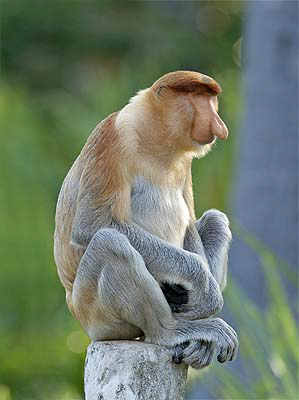 All instances of SCP-039 are to be contained in Site-77's Wilderness Observation Chamber-2B. At least two (2) security personnel are to monitor the interior and exterior of SCP-039's chamber, and are to rotate every six (6) hours. Staff members may not access SCP-039's chamber without an accompanying escort from site security, and may only do so for research purposes, or for the examination of the chamber for containment sabotage or contraband, which is to occur weekly.

As of 9-18-20██, SCP-039-8 has become pregnant; responsibility for its containment has been reassigned to personnel in the veterinary observation wing.

SCP-039 consists of twenty-three (23) instances of Nasalis larvatus, or proboscis monkey, who have been subject to radical anatomical changes. The eyes and mouths of SCP-039 are absent, leaving the face bare save for the nose and its accompanying nasal passages. Instances of SCP-039 possess acute auditory and tactile sense to compensate for a lack of eyes, relying mostly on physical contact with objects to perceive them, and on loud nasal snorts as a sort of echolocation to help them navigate in their environment. Necropsies have also revealed the digestive system to be absent; how instances of SCP-039 obtain nutrition — or, alternately, how they survive without it — is still a subject of research.

Instances of SCP-039 display signs of sapience, examples of which include communication via nasal snorts, an understanding of spoken English, and a complex understanding of machinery. Adult instances have demonstrated the ability to operate mechanical tools, and possess the ability to repair and manufacture various pieces of technology, such as disassembling and reassembling an internal combustion engine, and efficiently wiring a small apartment room. Testing has shown that SCP-039 appear to work more efficiently individually, rather than in groups, as instances of SCP-039 will often become distracted by one another.

Occasionally when working, instances of SCP-039 will clutch their abdomens and emit distressed vocalizations. If food is located nearby, they will attempt to smear their faces with the substance. It is currently hypothesized that this indicates that SCP-039 is the result of artificial manipulation of normal Nasalis larvatus specimens, with documents recovered during containment supporting this hypothesis. (see Addendum SCP-039-A)

SCP-039 are capable of reproduction and gestation not unlike Nasalis larvatus; as of the time of this writing, five (5) instances of SCP-039 have been born. SCP-039 show a very close bond among their species, with newborns often being cared for by all capable adults. New instances are born with anatomical anomalies similar to other instances of SCP-039, but lack the knowledge of other instances. Parent instances will educate newborns on communication and basic skills until they reach the age of six (6) months, at which point technological ability will be taught by other adult instances.

SCP-039 were recovered from an uninhabited research facility fifty (50) kilometers from the nearby town of ████████, Nevada. Documents recovered during containment placed ownership of the facility under ██████ █████, a company funding research for the advancement of natural human ability. Twenty (20) instances of SCP-039 had been apparently living in and maintaining the facility for an unknown period of time. Additional recovered documents indicate that a project was being conducted to augment human intelligence. This project appears to have been cancelled shortly before the company's collapse, with the assets sold to an unnamed group. Further research into ██████ █████ and the groups that acquired its assets has revealed several other anomalous objects, including SCP-1513.

Addendum SCP-039-A One additional instance of SCP-039 was discovered during containment operations of SCP-1328. Agents are currently following up on any reports indicating the existence of further instances outside of containment.

Addendum SCP-039-B Several documents recovered during initial containment appear to notate the early prototyping stage of SCP-039's development. Research has begun to develop a way to recreate the process that creates new SCP-039 instances; however, the damage the notes had accumulated prior to containment has rendered many of them unreadable.

…removal, they have become almost 100% more productive, not even counting the extra time due to reduced breaks and time off. With this success, we're considering removal of additional orifices, as long as the replacements or lack thereof do not reduce their output.

Wernher was looking at them as they worked today, and noticed some of them clutching their abdomens. Seems that they experience phantom hunger pains, even if they no longer require food. Unless this starts interfering with productivity, we're going to continue as-is.

We tried removing the ocular organs, and just having them work by memory. After a couple of inconclusive trials, we actually got one up to the point where it scored almost as high as the control test. We've decided to move forward with this initiative, and if successful apply it to all specimens.

EDIT: An update on this one. It seems the removal of sight has increased the tactile sensitivity of most of the specimens, and remarkably, this has brought the initial test subjects up to a level of productivity that exceeds the expected result. As such, we will be applying the changes to all available specimens. Some of them didn't take to it, but they're still good for spare parts. In the meantime, we've put them in storage.

After the success of the eyeball thing, Damien suggested that we could increase productivity by increasing auditory sensitivity. As long as they stayed in the factory they'd be fine, since there isn't much here to overwhelm the ears. Testing starts in a week or so.

A massive success! With the elimination of sight and the need for food, and with the amplification of hearing and touch, we've managed a total boost of 211% over our initial test subjects. Management has seen fit to give our division extra time to finish the project. And to think that we were sold this project for a lark! Man, I feel like dancing on air.

EDIT: Small incident today. One of the specimens was out of his pen, and had grabbed a couple of tools. We put him back in, and sealed it up again. Alan says he'll take another look at the doors tomorrow.