The Reincarnation Pilgrimage of the Yazidi (Kiras Guhorîn) 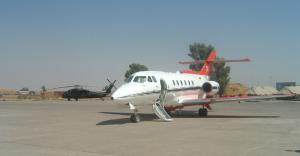 Once every year, a mobile task force is dispatched from Containment Command-02 in [EXPUNGED] to Site-22A to defend the runway and airport located there. The civilian facility is to be cleared of all non-SCP personnel by 0400 hours of September 23 and none are allowed to return until sunrise the next day. On October 1, all civilians must be evacuated again before sunrise and will not be allowed on to Site-22A until the return of the "Pilgrimage flight."

Pilgrims in transit from the "Arrival Flight" awaiting departure on the "Pilgrim Flight" may only be cross-examined by researchers with Level 3 security level clearance or higher.

SCP-036 includes the location, Site-22A (a small airport in the Mosul region of northern Iraq) and Site-22B (the destination of passengers boarding at Site-22A). The key components of SCP-036 are:

Originally, the Kurdish speaking Yazidi people around Mosul secretly performed the Pilgrimage themselves. Pilgrims from the east were escorted by masked armed guards on camel back into the care of Yazidi holy men. It has been explained that the holy men would then take the pilgrims west to their "land of the dead," where the pilgrims would wait to be "reborn" back into the Yazidi people. The ''kiras guhorîn'', literally Kurdish for "changing garments," is used to describe the belief of reincarnation that lesser souls of the Yazidi undergo. While this actual pilgrimage was done in secret, a symbolic pilgrimage and ''kiras guhorîn'' are performed every year at this time by other Yazidi.

During the 1960s, land acquisition by Kurds and Muslims, attacks by Turks, and punitive laws by the Islamic Iraqi Government, restricted the movements and customs of the Yazidi. During that time, the Foundation stepped in and offered aid in the way of an advantageous clause that granted SCP planes unrestricted access to airport facilities in the area. Almost immediately, mysterious planes carrying pilgrims from the east began landing at the local airport and an elusive airport at the destination appeared as well.