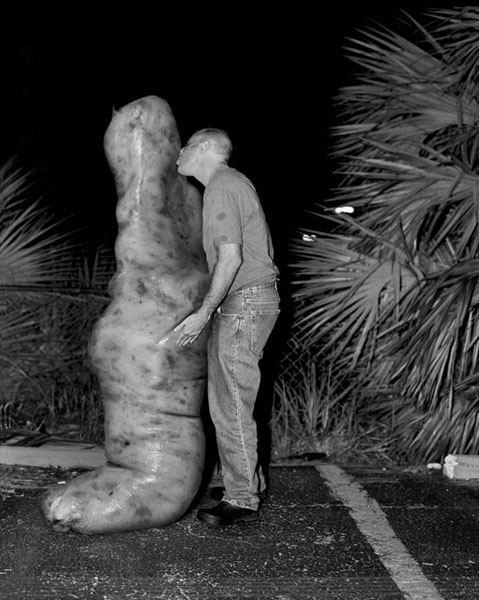 SCP-031 is to be contained in a standard humanoid containment chamber, located in Site-77's Safe SCP wing. Personnel interacting with SCP-031 are not to view it directly, and communicate with test subjects through an intercom system installed in each chamber. The containment chamber is to be cleaned once per week by custodial staff wearing opaque goggles to mitigate SCP-031's effect.

SCP-031 is an amorphous organism, with a mass of 75 kilograms. SCP-031 is able to move at a pace of 3 km/h, and leaves a trail of oil when it moves. It is only capable of rudimentary physical movement. Testing of recovered tissue samples has shown that SCP-031 is at least partially composed of human muscle and epidermal tissue. SCP-031 is capable of reproducing human speech in any pitch or tone, although it is not currently known how SCP-031's biology produces them.

Subjects directly perceiving SCP-031 will see it as an individual the subject(s) knew and had a romantic attraction to at some point in their past. When made aware that it is being observed, SCP-031 will claim to be this person, and that they have been left destitute by some event in their past. SCP-031 will use this to attempt to persuade the subject to allow it to stay with them for an extended period of time, until it is able to return to a stable situation. This effect applies to all persons who view SCP-031, and research has not determined an upper limit to the number of persons who can be affected by SCP-031 at the same time.

After inspecting the residence, SCP-031 may attempt to start a romantic relationship with the subject and if successful it will begin living in their home. Several cases have been documented where SCP-031 began to actively affect more than one subject at a time, eventually having a nest containing between at least eighteen different hotel rooms containing subjects with some form of relation to SCP-031.

SCP-031 was recovered following contradictory police records taken after a riot in [REDACTED]. Multiple subjects reported wildly contradictory views about SCP-031's appearance, and initial civilian units were also affected. However, wide distribution of amnesiacs and inhaled tranquilizers pacified all affected subjects, and MTF-Psi-7 was able to recover SCP-031 from the condemned hotel it had taken residence in. As of 11/16/1958, SCP-031 has been classified as Safe.

Addendum: Research has determined that aromantic subjects are not affected by SCP-031. However, all of these subjects will report SCP-031 as being a small, plump humanoid figure with specific features being obscured by dark smoke emanating around the entity in the shape of SCP-031's body. Further testing is required to explain this phenomenon. Further testing has shown that the perception of subjects affected by SCP-1937 is similarly affected.